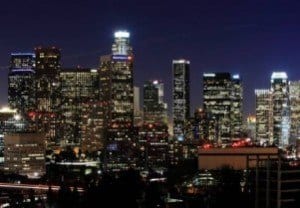 Nightcrawler is a new film that was released recently staring Jake Gyllenhaal that hit theatres this month. It is a thriller that will be sure to stick with you. There are many things about this film that stand out and make it a good film.

Nightcrawler is the story of Lou Bloom, a financially unstable man who lives in LA. He is stealing copper, metal, and even man hole covers to make ends meet. One night he happens upon a horrible car accident where he meets a man who video tapes accidents or crimes and sells them to news channels. Bloom dives into this world and thrives, becoming the go to guy for obtaining these videos. Bloom eventually hires an assistant to help with these jobs. As the movie goes on you can tell that an already unstable Lou Bloom is becoming more and more unstable.

He begins manipulating evidence and crimes so he can get better videos. He causes accidents, hides criminals, and lies to anyone and everyone, which eventually leads to the death of his partner. He also causes the horrific car crash of the rival team that shoots videos. The smooth talking Bloom gets out of any chargers and at the end of the film hires even more people to work for his company. The film starts out a little slow, and one can even get bored and want to leave the theatre or turn the film off, but I urge you not to. As the film goes on you become enthralled and it takes you through a range of emotions that are sure to leave a mark.

Jake Gyllenhaal does an excellent job in this film, but it I also have mixed feelings about it; that’s what makes it so great. Gyllenhaal lost weight for this movie to create a skinny and creepy looking man. Gyllenhall definitely pulls this off; in fact he is so creepy it almost makes the viewer hate the movie. You can’t stand Lou Bloom, and that’s what makes Gyllenhaals performance so memorable. His character has you on the edge of your seat and have you shocked at what he does and how he acts. The music choice is also good. At the beginning the film the music is slower and quieter, but as it goes on it speeds up and gets louder, bringing you in more and more. The plot is outstanding, the story is a memorable one and takes twists and turns that only Gyllenhaal can pull off with his great performance.

Overall this is a great film to see. All the elements like the plot, the music, and the filming are alright. But what makes it great is the creepy yet astounding performance by Jake Gyllenhaal. Be prepared to be shocked, creeped out, but come away knowing you just watched a good movie.