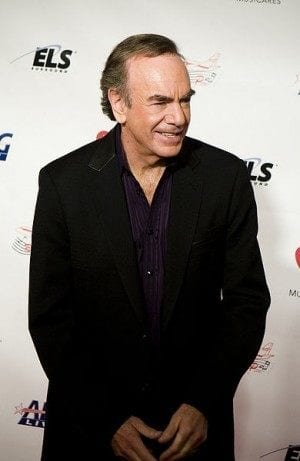 Neil Diamond married his manager Katie McNeil in front of family and close friends in Los Angeles on Saturday, April 21. “Katie and I got married last night, we wish you all could’ve been there. It was magical!” he posted on Twitter Sunday night.

This is the third marriage for Neil Diamond and the first for 42-year-old McNeil. In 1963, Diamond wed his high school sweetheart Jaye Posner, with whom he has two daughters, Marjorie and Elyn. The couple divorced in 1969, and in December of the same year, Diamond married Marcia Murphey, a production assistant. He has two sons, Jesse and Micah, from that marriage. Diamond and Murphey divorced in 1995.

The legendary singer was excited to announce his engagement to McNeil to all his fans on Twitter last September. “Good news coming from sunny LA/ and you’re the first I want to tell/ Katie & I just got engaged/ and I hope you wish us well. Neil.”

“I’d like you to meet Katie,” he posted, with a picture of his new fiancé. “I’m lovestruck.”

On December 30, 2011, Diamond tweeted, “What a year! R&R Hall of Fame, Kennedy Ctr Honor, Billboard Icon Award, a Grammy nom., and best of all the hand of the girl of my dreams!”

Last year Diamond was a recipient of a Kennedy Honor for his contribution to American culture through the arts and was inducted into the Rock and Roll Hall of Fame.

Known for hits such as “Sweet Caroline,” and “Love on the Rocks,” Neil Diamond will kick off a summer tour of the U.S. on June 1.

[easy-social-share buttons="facebook,twitter,google,linkedin,stumbleupon,pinterest" counters=0 hide_names="force" fixedwidth="yes" fixedwidth_px="111"]
Previous ArticleKevin Love will not be seen back on the court this seasonNext ArticleColorectal Cancer: Preventative medicine is key