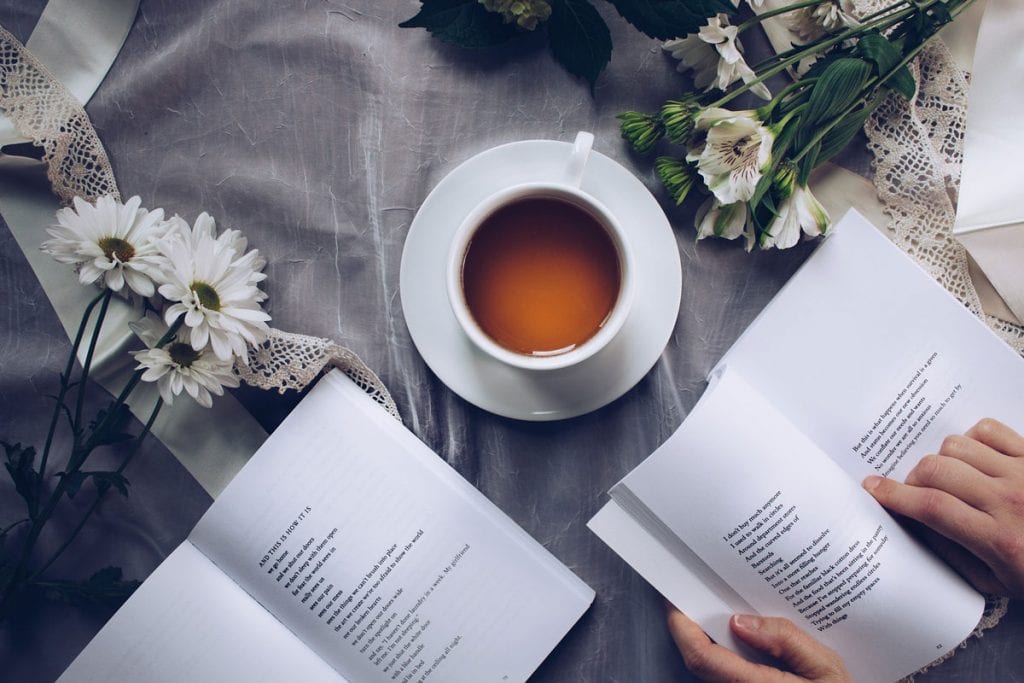 “It was an April morning: fresh and clear,” wrote William Wordsworth in 1815, perhaps not realizing that two centuries later, those words would mark not just the freshness of spring in April, but also National Poetry Month.

To us, celebrating the beginning of spring with its budding trees and blooming flowers with our favorite poets seems only too apt.

“The spirit of enjoyment and desire,/And hopes and wishes, from all living things/Went circling, like a multitude of sounds,” wrote Wordsworth once upon a time.

So, if like us, you’re looking for some literary inspiration this month, here are our favorite contemporary poets to read this National Poetry Month.

You might remember her from the incredible 2011 TED talk, or perhaps you came across her 2014 book, No Matter the Wreckage. Either way, Sarah Kay, founder of Project VOICE, has made a name for herself in the poetry world today. Kay tours the world, bringing poetry into classrooms, empowering kids to express themselves through words.

If you’re just getting into Kay’s work, start with Peacocks.

The line that gave us chills? “I’ve been searching for my favorite constellations everywhere, but I haven’t seen any yet. The spaces between stars are all different here, much wider.”

Another master of the art of spoken word, Anis Mojgani is a half-Persian, half-black poet from Portland. Mojgani has authored five books, most recently In the Pockets of Small Gods. The two-time National Slam Poetry champion is perhaps best known for his poem Shake the Dust.

If you’re just getting into Mojgani’s work, we recommend For Those Who Can Still Ride An Airplane for the First Time.

The line that gave us chills? “I dream too much and I don’t write enough and I’m trying to find god everywhere.”

We also recommend following Mojgani on social media. His tweets and instas bring a little bit of joy an introspection into our feeds—something we all need more of these days.

Sometimes referred to as the poet laureate of Twitter, Patricia Lockwood rose to internet fame after her poem Rape Joke was published by the Awl in 2013. Since then, Penguin Books has published her second collection, Motherland Fatherland Homelandsexuals.

If you’re just getting into Lockwood’s work, start with this excerpt from Rape Joke:

Rupi Kaur: the Instagram poet. Love her or hate her, it’s certain that you’ve stumbled across her work in the explore feed at some point.

Kaur is the author of two books, Milk and Honey (2014) and The Sun and Her Flowers (2017). She’s gone on a world-wide tour to promote her work, and on top of that, manages a flourishing social media presence where she regularly releases her work.

British Somali poet Warsan Shire is another noteworthy contemporary poet, known to many as a compelling voice on black womanhood and the African diaspora. Her work has been featured everywhere from high-brow literary magazines to Lemonade, Beyoncé’s visual album.

Just starting with Shire? Begin with this excerpt from home, the poem featured on Lemonade:

Tracy K. Smith is the current poet laureate of the United States, a role no longer reserved for old white men. She has published four collections of poetry, one of which won a Pulitzer. Smith also produces a daily podcast called The Slowdown, to make contemporary poetry more accessible and offer a different way to see the world.

Just getting into Smith’s work? After subscribing to The Slowdown, we recommend starting with her poem My God, It’s Full of Stars. Here’s an excerpt:

Perhaps the great error is believing we’re alone,
That the others have come and gone—a momentary blip—
When all along, space might be choc-full of traffic,
Bursting at the seams with energy we neither feel
Nor see, flush against us, living, dying, deciding,
Setting solid feet down on planets everywhere,
Bowing to the great stars that command, pitching stones
At whatever are their moons. They live wondering
If they are the only ones, knowing only the wish to know,
And the great black distance they—we—flicker in.

Poet Rudy Francisco is another spoken word master. He’s written four books: Getting Stitches (2013), Scratch (2014), No Gravity (2015) and Helium (2017) and won numerous awards for his performances. His work has been featured widely, including on the Tonight Show Starring Jimmy Fallon.

If you’re just starting with Francisco’s work, we love Complainers.