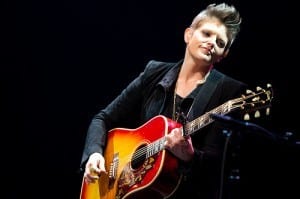 Natalie Maines, of Dixie Chicks fame, has branched out by releasing her first solo album. “Mother” is a vast departure from Natalie Maines’ country roots, but the record is receiving rave reviews. The album, produced by Ben Harper, is a combination of covers and original tunes and showcases Natalie Maines’ vocal talent.

Natalie Maines is, of course, best known as the front woman of mega- girl- group, the Dixie Chicks. The band achieved unparalleled success as an all-female country act before an ill-timed statement by Natalie Maines at a concert in London over the Iraq war brought their popularity to a screeching halt. The fallout was swift, with record bans and album burnings, as well as the now-infamous feud with Toby Keith. Despite their follow-up album being critically acclaimed, Natalie Maines’ sentiments didn’t sit well with the country music community and their popularity all but disappeared.

Now, seven years later, the Dixie Chicks are on an indefinite hiatus, and Natalie Maines is trying to rebuild her reputation with her debut solo effort. Even though the differences in genre, and the lack of accompaniment by the other “chicks” might feel a bit foreign to former fans, Natalie Maines’ talent is sure to shine through regardless.