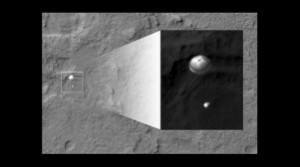 NASA celebrates its landing of Curiosity on Mars

“We’re safe on Mars,” said Allen Chen, an engineer in the NASA control room, inciting a room of ear-splitting cheers, hugs and handshakes.

Mike Watkins, manager of the NASA Curiosity mission, said, “We have ended one phase of the mission much to our enjoyment,” adding, “But another part has just begun.”

Mars’s Mount Sharp is approximately 3.4 miles taller than Mount Whitney in California, according to Fox News. The object appears to be related to Martian life.

Also according to Fox News, the NASA Curiosity project seeks hints of environmental history that the mountain could hold.

Photos were released showing the NASA Curiosity space vehicle during its land onto Mars, where the rover’s shadow is visible. The NASA rover landed in a parachute.

According to Fox News, precision in the landing’s photography was key, as was it difficult. Sarah Milkovich, HiRISE investigation scientist said, “If HiRISE took the image one second before or one second after, we probably would be looking at an empty Martian landscape.”

Due to this accomplished landing, the world’s questions of outer space have been turned towards NASA. According to The New York Times, the United States NASA now stands ahead of Russia, Europe and China, discarding its image of lagging.

Granted NASA Curiosity weighs one ton, mission crew did not want to risk using cushions or air bags for the landing. Rather, the mission entailed carefully placing the machine onto Mars from a separate rocket surface, lingering above.

Photographed was “a new Mars we have never seen before,” as stated by Watkins. Watkins added, “So every one of those pictures is the most beautiful picture I have ever seen.”

Though no one knows when the next Mars landing will take place, NASA hopes that a discovery by Curiosity will inspire Congress and citizens to invest in further Martian investigation.