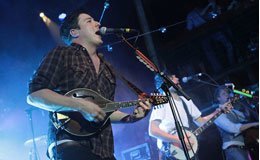 Mumford & Sons are not new phenomena to the music world.

Originating in 2007 in the underground, folk scene of London, Mumford banded together with the intent of formulating “music that matters, without taking themselves too seriously.”

“Sign No More”, released in October of 2009, was their first full-length album. Unsurprisingly, the phenomenal album was produced under Markus Dravs (Arcade Fire) and licensed under Glassnote Entertainment Group (Phoenix, The Temper Trap).

The most winning quality of this band is their endearing and sometimes dark lyrics, catchy songs and spell-binding live performances.  Some of the most memorable tracks performed live, surprisingly, were “Awake My Soul” (their very first song written together) and “The Cave”.

The Mumford & Sons craze has recently ignited in the U.S., a testament to the fact that every single date of their U.S. fall tour was completely sold out. Mumford even received recognition for Little Lion Man from MTV as a regularly played music video and by Mark Hoppus (Blink-182) as one of his current favorite top songs.

They can also be found on the Billboard charts, peaking at fourth and 16th  positions for Best Rock Song (Little Lion Man) and Album.

The energy of their live sets is undeniable, so if you missed out on their most recent visit do not fret because Mumford & Sons have established a set home in Americans hearts.