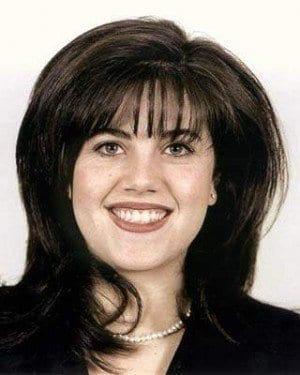 Monica Lewinsky back in the spotlight again

PBS will air a two-part four hour documentary titled “Clinton” this coming Monday, Feb. 20th. The documentary will bring to light new information and dedicate a full hour to the relationship between former president Bill Clinton and Monica Lewinski. One can not help but wonder will this reopen old wounds for America’s most infamous White House intern?

Monica Lewinski after the scandal broke had a book deal that made her $500,000 and appeared on a 20/20 interview with Barbara Walters that gave her another $1 million in international rights. Lewinski would later go on to become an instant pop culture celebrity and often placed herself in the public spotlight. She debuted as the spokeswoman for Jenny Craig and as a host of a reality showed called “Mr. Personality.”

In more recent years, Monica Lewinsky has attempted to keep a low profile. In 1998 when asked to sign an autograph, she declined saying, “I’m kind of known for something that’s not so great to be known for.”

Lewinsky went on to graduate with a master’s degree in social psychology at the London School of Economics. Since graduation, the Enquirer reported on her time after school, “She said she’s been doing some freelance work for a friend who has a public relations company. And she’s got some family money, so that keeps her going.” The tabloid continued by commenting on her social status, “She’s alone most of the time and is pretty much a social pariah.”

Monica Lewinsky might have been successful in staying out of media attention lately, but this reclusive lifestyle will certainly be disrupted when PBS airs the “Clinton” documentary.

Lewinsky has maintained that President Clinton lied under oath about their relationship and portrayed a skewed idea of her to the public in his memoir titled “My Life,” stating, “He talked about it as though I had laid it all out there for the taking. I was the buffet, and he just couldn’t resist the dessert.” The public can now only wait for her reaction, if any, to the Presidents’ Day documentary.