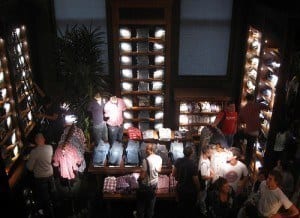 No pants larger than a 10 will be worn on cool kids.

The CEO of Abercrombie & Fitch, Mike Jeffries, says he will never allow plus-size clothing into his stores. Jeffries has even gone as far as to say he only wants attractive employees working for him. It’s one thing to be against selling plus-size clothing in your store, but it’s another thing to judge what is “hot” and “cool” based off a person’s weight.

Steve Hoch, a marketing professor at the University of Philadelphia, says Jeffries has been “unapologetic about this exclusionary marketing forever. They have a very targeted, narrowly defined [customer] in age and what type of body, even what ethnicity you are, and they’ve been able to hold on to it.” The narrow-minded CEO has made it abundantly clear he only wants a certain type of client shopping in his stores and if they don’t fit that image, they should shop elsewhere.

In 2006, Jeffries told Salon, “In every school there are the cool and popular kids, and then there are the not-so-cool kids. Candidly, we go after the cool kids. We go after the attractive all-American kid with a great attitude and a lot of friends. A lot of people don’t belong, and they can’t belong. Are we exclusionary? Absolutely.”

But who’s to say the cool kids must be a size 0? Who created the rule that anyone being referred to as popular must wear a size M shirt? According to Mike Jeffries, only slim and thin teens can be cool. I’m not sure which schools Mr. Jeffries attended growing up, but where I come from, as long as you are a respectful, genuine person, anybody can be cool. I understand rejecting the idea of plus-sizes, but to assume all beautiful people be a size 2 is ridiculous.

Mike Jeffries needs to reevaluate his terminology and what the real definition of beauty is. One could say the same of him if he was to walk into one of his own stores. What makes him hot and cool? Remember, Mr. Jeffries, money doesn’t buy happiness and image doesn’t define a person’s character.

Previous ArticleTelsa, the next leading electric carNext ArticleVerizon Wireless and Samsung Note 10 Team Up to Deliver Quality and Coverage