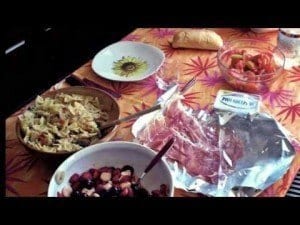 Mediterranean diet traditionally includes large amounts of olive oil, nuts, fish, fresh fruits and veggies that all pack an incredibly positive punch to your life span (25+ years is an exaggeration of course) by helping your body build up against heart disease and strokes.  A new large study from Spain has shown that the Omega-3 heavy Mediterranean diet of the sea basin’s residents have given them the gift of healthier hearts than the rest of the world.  Olive lovers and hummus eaters rejoice!

The latest study rounded of thousands of older adults with diabetes or at high heart risks and assigned two to a Mediterranean diet and one to a control diet centered around low-fat dairy products, grains and fruits and vegetables.  The study found a 30% correlation between a Mediterranean diet and longer heart health, as that many more members of the control group dropped off, while the nuts and olive oil guzzling Mediterraneans lived to drink another bottle of red wine (also for heart health of course).

The biggest difference in this study was its focus on certain types of food, instead of on calorie cutting.  Participants were allowed to consume as many calories of Mediterranean diet deliciousness as their diabetes suffering bodies desired, however olive oil or nuts were to be a major contender in most of their meals. Says Walter Willett, chair of the department of nutrition at the Harvard School of Public Health. “One of the advantages of the Mediterranean diet is that most people find it is easy to stay with for the long run, because it offers great variety, satiety and enjoyment.”

The miracle element? Omega-3 fatty acids that are found in high concentrations in salmon and walnuts.  Unlike saturated nasty fats from fried dough and meats, Omega-3 fatty acids give your heart a shiny gloss of protection, boosting its life and tenacity.  Given that most people fighting heart disease have a hard time cutting back on their daily food intake, Mediterranean diet could be an incredibly effective player in fighting cardiovascular trauma in the global heart disease population.  Bon appetit!