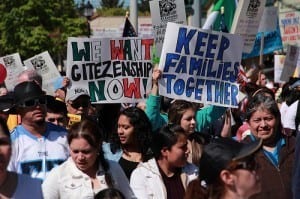 May Day in Seattle could turn from a celebration for spring into a day of hate and violence. For the second year in a row, peaceful marches turned into riots with police using pepper spray and “flash bangs” to control the crowd.

Violence first broke out a few hours after a May Day march for immigration reform ended. The two groups that started the fighting hail from two very different viewpoints.

“I don’t even want to characterize them,” said John Zangas, a member of the May Day Workers, “but they’re fairly bigoted.”

The White Student Union saw the spark differently. When things turned violent, bags of urine and flag poles were the weapons of choice for the two sides.

“We were here to protest communism and to stand up for the blue collar working class,” said Matthew Heimbach, president of the White Student Union. “And then I got urine thrown on me.”

But as the violence escalated, protesters turned to throwing whatever was at hand. Police shielded themselves and businesses from glass bottles, rocks, street barriers and trash cans, among other things.

The incident is eerily similar to the riots that happened last May Day in the city. Many hope that this will not become a traditional May Day activity.

“We’re a bigger and better city than this,” Seattle Mayor Mike McGinn said. “I look at this and I am disappointed that this is the picture the world sees of us.”

Other May Day rallies went off without a hitch. People marched in cities across the country to try to bring focus to immigration issues facing the nation. In Salem, Ore., Gov. John Kitzhaber signed a bill that will allow people without proof of legal status to obtain drivers licenses. Other marches, like ones in New York and Denver, drew thousands to their cause.

The violence in Seattle ended with the arrests of 17 people, eight officers injured and, what is likely to be, thousands of dollars in property damages.