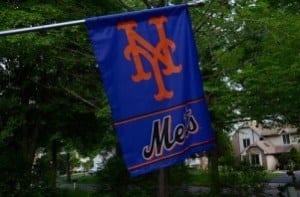 Matt Harvey stepped on the pitcher’s mound in a Mets jersey for the first time last night, and blew the crowd away with his propitious debut that resulted in a 3-1 victory for the Mets.

Not only was Thursday night’s game Matt Harvey’s first game as a New York Met, but it was also the debut of his career in the major league.

Harvey explained how he felt he belonged in the major league before he even threw his first pitch last night at Chase Field against the Diamondbacks. “When I was warming up, actually, I looked around and kind of took everything in, and at that moment, I really did believe I was meant to pitch in the big leagues,” Matt Harvey said.

His results were strong as he set a franchise record for the Mets by striking out eleven Diamondbacks in his debut game. Matt Harvey awed the crowd and brought back hope to all Mets fans as he did not allow a run with his fast ball that touched 98-miles-per-hour.

“He’s lived up to exactly what everybody’s talked about,” Manager Terry Collins said. “It’s great to know you have a young man like that because it just tells us the future’s bright.”

Gerardo Parra was the first batter Harvey faced and struck out with an 89-miles-per-hour slider. The rookie pitcher struck out the Diamondbacks third, fourth and fifth hitters a combined six times.

To top it all off, the mound was not the only place Matt Harvey excelled in. In the second inning, the 23-year-old hit a rocket into center field, getting a double as his first hit in the major leagues. His next at-bat was another success as he sent the ball just beyond second base for a base hit.

According to the Elias Sports Bureau, Matt Harvey became the first player since 1900 to have at least ten strikeouts and at least two hits during his debut game.

After the game that brought the Mets out of their six-game losing streak, Harvey’s teammates drenched him in beer, and when he returned to his locker room, he had 76 text messages on his phone.