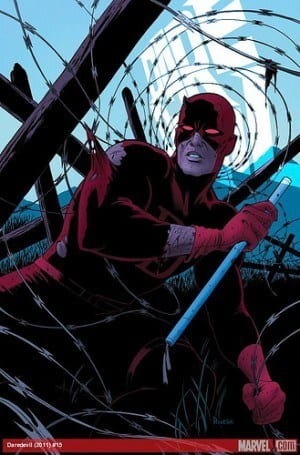 Marvel continues to own the superhero game

Daredevil is getting his own Netflix show and trust me, this could actually be a good thing. Marvel has teamed up with Netflix to produce four separate series focused on a different hero: Daredevil, Jessica Jones, Luke Cage and Iron Fist. These will all lead up to a group miniseries called The Defenders, which Netflix and Marvel describe as “a dream team of self-sacrificing, heroic characters.”

Netflix has announced that Daredevil will be the first of these Marvel series to launch in 2015, followed by the three other aforementioned heroes. Similar to hit Netflix series like House of Cards and the Arrested Development follow-up, the episodes of a given series will all be immediately available to “binge watch” – we really need to come up with a new term for that by the way.

Netflix noted that “the epic will unfold over multiple years of original programming,” as well as “take Netflix members deep into the gritty world of heroes and villains of Hell’s Kitchen, New York.” In the Marvel Universe, Hell’s Kitchen has been traditionally home to Daredevil and other “street vigilantes” like Luke Cage.

The Netflix series will be produced by Marvel and ABC Television series, and each series will have a minimum of 13 episodes each.

Marvel Entertainment President Alan Fine expressed his enthusiasm for the news, saying “This serialized epic expands the narrative possibilities of on-demand television and gives fans the flexibility to immerse themselves how and when they want in what’s sure to be a thrilling and engaging adventure.”

This is the latest head grown from Marvel Studios’ ever-expanding hydra of multi-platform entertainment. Along with the highly-successful super hero series of films surrounding The Avengers, Marvel also has recently breached into the live-action TV market with Agents of S.H.I.E.L.D.

The Netflix deal answers the question of whether or not Marvel was going to take another stab at the Daredevil character. Marvel recently reacquired the rights to the character in 2012 after 20th Century Fox had failed to produce a new incarnation of the hero. While the Ben Affleck-starring Daredevil film of 2003 has been a widely-considered failure, Netflix could be the solution that the “Man without Fear” needs. Here’s hoping that the Daredevil series takes cues from Brian Michael Bendis’ excellent Daredevil comic series that began in 2001.

The Netflix format could potentially give Marvel the opportunity to create a series that isn’t as diluted and dumbed down as a major network show like Agents of S.H.I.E.L.D. (Sorry, it’s not that great.)

Netflix is also an ideal home for characters like Luke Cage, Jessica Jones and Iron Fist, as these characters are “street level” heroes who don’t have powers and abilities on par with characters such as Thor and The Hulk. It will be interesting to see a Marvel superhero tale pan out over a longer period of time, spanning multiple series.

Marvel’s new line of Netflix series does not yet have any creative names attached to it, or any contenders for the superhero roles. But I assure you, the internet will begin speculating about that probably right…now.