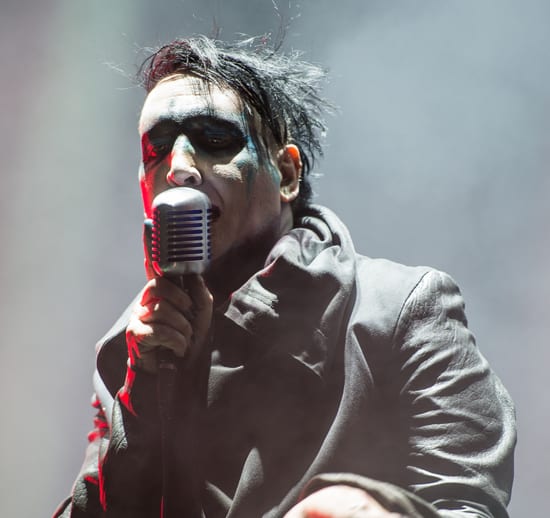 Rock star Marilyn Manson was struck by a stage prop towards the end of his New York concert on Saturday September 30. The rest of the show was cancelled as the artist was taken to hospital.

Videos of the incident appear to show the singer attempt to grab hold of one of the props: a metal structure with two large guns. As he seemed to climb it, the prop toppled over on top of him. Security guards rushed onto the stage to lift it off him.

The extent of Marilyn Manson’s injuries has not yet been verified, however, some audience members have said that he appeared to be knocked out by his fall. Others speculate that he suffered a leg injury. Reports on social media say that he lay on stage for approximately 15 minutes before he was taken away on a stretcher.

Nine dates of Marilyn Manson’s tour have subsequently been cancelled while he recovers from his injury.

In a statement, the star’s publicist said: “Marilyn Manson is being forced to cancel several of his October dates on his forthcoming US tour.

“On Saturday night, the legendary performer suffered an injury on stage towards the end of his set at NYC’s Hammerstein Ballroom causing him to cut the show short.

“He was treated for the injury at a local hospital and will be recuperating at home in Los Angeles.”

Marilyn Manson, whose real name is Brian Warner, is not the first artist to be injured on stage whilst performing. In 2015 Enrique Inglesias cut his hand on a drone as he attempted to use its camera to give the audience a better view of the stage. He sliced several fingers and fractured his hand, but kept performing. Vocalist Florence Welch of Florence and the Machine broke her foot when she jumped off the stage at the Coachella music festival in California.

Marilyn Manson had performed three dates of his three-month-long tour at the time of the incident. It is unknown whether more dates will be cancelled.

Manson’s publicist added, “The shows from Boston, October 2 through Houston, October 14 will be rescheduled for a later date. Manson hopes to return to the stage soon, more details on upcoming shows to follow.”