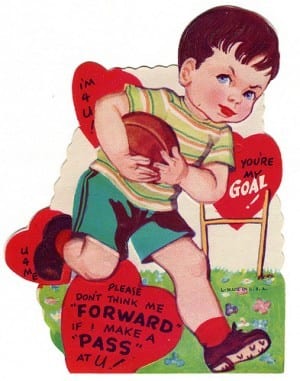 Manti Te’O’s only making reservations for one this Valentines Day.

Everyone’s in an uproar over a woman that doesn’t exist. Yet real, living breathing human beings of the female anatomy get no love.

Are we really meant to feel sorry for Manti Te’o? He’s been given this heroic yet sympathetic image in the media as the jock who dates a car accident victim, that dies from cancer, that doesn’t actually exist.

The entire story is worthless and frankly quite disrespectful to actual cancer patients and victims of sexual assaults, especially those carried out by college football players.

I was so amazed yesterday by how much time FOX (which I completely watched on accident after American Idol) spent on the Manti Te’O story. I went from not knowing Mantai Te’O, the now infamous lover of invisible women, to learning his entire football and relationship history with Lennay Kekua, the woman who doesn’t exist.

And why is this news?

By midnight, my Facebook newsfeed was filled with dark humored memes and men fondling air, aka their invisible companions.

Lizzy Seeberg committed suicide soon after the incident following a line of threats from a friend of the football player who told her “Don’t do anything you would regret. Messing with Notre Dame Football is a bad idea.”

In a nutshell Manti Te’O is either a genius or a complete idiot. Solely because he’s an athlete, I’ll give him the benefit of the doubt and go with the latter. I don’t know what his actual grades are but he can’t be too brilliant to carry on an exclusively online relationship with a woman, who may or may not have been a good friend playing a terrible prank (or secretly showing his true affections for Manti Te’O, whichever), for four years.

Besides the real woman behind the infamous hottie photo taped to Manti Te’O’s locker and of course Te’O no one should care. Oh, and of course Notre Dame.

But to everyone else taking the time out of their day to feed into this melodrama, buy the man a blow up and get on with your lives. At least then Manti Te’O will have a somewhat real Valentine.