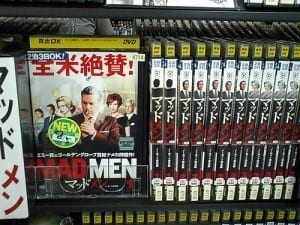 The folly of Donald Regellius Draper

Mad Men’s season finale aired last night, irrefutably proving once again that Don Draper is a sonofabitch. The last episode of the year was full of lies, death and chocolate; which is coincidentally the next short story of Mad Men’s eye-patched science fiction writer Ken Cosgrove.

The final episode of Mad Men’s sixth season opened with boozy Don Draper being even boozier than usual. Don’s relationship with his daughter Sally has been non-existent since she walked in on him further compromising his integrity with his neighbor/side lady Sylvia Rosen. Thus the anti-hero of Mad Men has taken to the bottle, adding a little liquor to his morning coffee, skipping meetings to go to bars and even going to jail for getting in a fight with an Evangelical Christian at said bars.

Don has his coming-to-God moment (despite beating up an Evangelical Christian) and decides he needs to make a change in regards to his drinking and his life. So he does what he does best: steals another man’s idea. Mad Men has shown Don stealing ad strategies and identities in the past, so it should come as no surprise that he pilfers his escape plan as well. Earlier in the episode the pot-fuming grizzly man Stan tells Don that he wants to take the open position in California for the Sunkist account; so Don promptly takes it from him like any grade school bully would.

Don tells Megan that they’re going to move and that it will be the cat’s pajamas or some such, and their lives will be perfect forrrreeeeeever! But we’ve been watching Mad Men for six seasons now; I think we’re smart enough to know that next season (the last season) is not going to be Mad Men: Malibu.

Meanwhile the Greek tragedy that is Pete Campbell’s life continues to entertain and depress all who are around to witness it. The wily little weasel has now been orphaned by the most outrageous circumstances: his father died in a plane crash and apparently his mother has fallen off the side of a cruise ship. Needless to say, Pete is kind of a mess in Mad Men’s season finale.

Pete the fink blames his mother’s death/disappearance on Bob Benson, the inscrutable Don Draper Lite whose recommendation of caretaker Manolo ultimately lead to this kerfuffle. But the curious Mr. Benson (whom I thoroughly enjoy) outthinks Pete the fink and sets him up for embarrassment on the Chevy floor room. Silly Pete, you can’t drive a stick shift! You only just got your driver’s license last year!

Meanwhile, Peggy is set up for more disappointment with the honorable/not-so-honorable Ted. After Ted calls off their affair for like the third time, Peggy decides to play the role of provocateur as she strolls by Ted all dolled up for a date. This of course completely works and Ted shows up at Peggy’s apartment, tells her he loves her and wants to leave his wife, and they promptly sleep together.

In addition to proving that Don is a sonofabitch, Mad Men cements the fact that Don Draper’s general shitiness infects those around him. Though he was more of an ancillary character, Ted was for all intents and purposes a good man before joining SDCP. But after being in Don’s presence for a while Ted has become a sloppy drunk at times, he has taken up a mistress and discarded the aforementioned mistress as casually as Don has in the past.

So it is with great desperation that Ted steals Don’s already stolen plan to escape with his family to California, which is apparently ultimate fixer MacGuffin on Mad Men. In a moment of drunken sobriety, Don spills his guts with Hershey about his first experience with a whorehouse Hershey bar, thereafter deciding to give Ted the California exit.

Mad Men’s season finale is a game of musical chairs and fake-outs that puts many of its characters in the position of freedom for the future. Pete’s ex-wife Trudy says as much when he says goodbye to his daughter before leaving for California. Pete is free of his parents, Peggy is free of all relationships and Don seems to be free of the fear of his past.

Mad Men’s sixth season focused on many Dick Whitman flashbacks and Don becoming more open about those moments. The finale even ends with Don taking his children to the brothel where he grew up. Is Don attempting to regain the part of his soul that he lost when he let Dick Whitman go? Is his sobriety a facet of this? Color me pessimistic but I kind of doubt that Dick Whitman, California or any other solution that Don comes up with will truly heal this broken man.

That’s it for season six folks and we only have one more season of Mad Men left. I can already hear all of the complaints about its series finale and the horribly predictable comparison to the finale of The Sopranos. Stupid people.