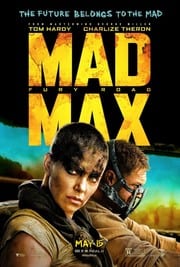 With so many remakes and sequels these days, I didn’t really think a fourth Mad Max movie was needed but this one is a hypnotizing ride of non-stop action and imaginative weirdness from the beginning to the end. This is a movie that doesn’t try to be anything more than it is, an action movie. It is a celebration of action films of the bizarre post-apocalyptic kind. This vision of a tribal desert society that worships a severe god-like ruler is similar to the earlier Mad Max films.

In the earlier films which all are directed by George Miller, the desert marauders were basically scavengers looking for gasoline. In this film, they seem to have developed a self-sustaining society in the desert, complete with water pumped from wells and a kind of hydroponic garden for food, although it doesn’t look like it could possibly sustain the population density shown.

There are indications that the society is sick. One character seems to exist on blood transfusions from Max, played by Tom Hardy of “The Dark Knight Rises”. Another character is deformed. The ruler of “The Citadel” wears some sort of breathing device featuring a terrifying face mask.

As in all the Mad Max films, the vehicles are an important part of the story. In this film, the vehicles are even weirder, from big trucks to motorcycles, most driven by people who think they are going to Valhalla if they die in battle, and they do love to battle, especially after huffing chrome spray paint. These cats are crazy, man.

On one big truck, there is a guy standing on a platform in front with a double-necked guitar that also shoots flame, playing rock and roll while the truck goes into battle. In the back of the same truck are a bunch of Taiko drummers banging away. Some vehicles have long poles attached with men hanging on to the ends of the pole, swinging way back and forth to attack other vehicles.

In some of the road warrior scenes, spears with explosives are used to kill people and disable vehicles. In one scene, guys on motorcycles jump like Evel Knievel over cars and trucks, while hurling hand grenades downward. Max and Furiosa and others shoot the flying motorcyclists out of the air.

The people of The Citadel look strange in the film, many of them appear to be painted a ghostly white. The vehicles are also very strange, as if someone had turned a madman with a wild imagination loose in a junk yard with welding equipment. Reportedly, a lot of this stuff was made with parts from junkyards. In one scene, a big guy pulls a supercharger, and a big hunk of the engine, apart from the rest of the engine with his bare hands.

The movie is like a continuous chase scene, with lots of gunfire, explosions and fist fights. It isn’t really believable and it doesn’t really make a lot of sense, either, but it is fascinating to watch. It is a real spectacle. I couldn’t take my eyes off the screen.

While the story makes no sense on many levels, it does make sense in terms of interpersonal relationships. The main characters make sense, and they do develop relationships with each other that change over the course of the film. It is these dynamic, striving characters that kept me glued to the screen. The action is amazing, but the characters, and their emotional journey, that’s the heart of the movie.