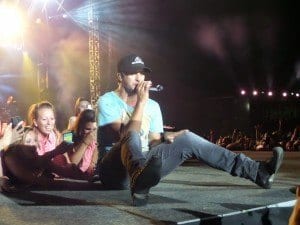 Luke Bryan might be one of country music’s biggest stars, but he’s still a man of traditions.

A portion of the proceeds will be donated to local college scholarships which are all part of the Luke Bryan Farm Tour Scholarship. The money benefits students from farming families in each of the local communities the Farm Tour visits.

In 2013, Bryan broke the record for having the most fans in attendance out of all of his farm tours having played for more than 115,000 fans last year and stopping in eight different cities. This year’s tour will be visiting eight cities as well and branches out little more north with the first show kicking off in Knoxville, Tennessee on October 1st.

Bryan took to Twitter to inform fans that he has added a couple of new songs to his set list this fall, which include “She Get My High” and “Shut It Down,” giving them all a chance to learn the words and sing along.