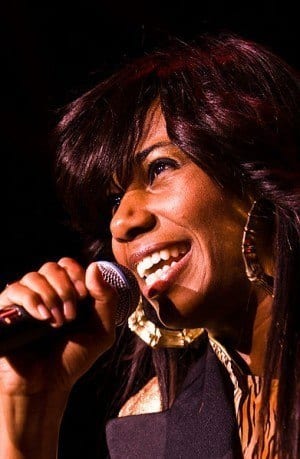 Standout performance: Santigold
While she’s often compared to fellow female rapper M.I.A., Santigold’s Lollapalooza performance let any naysayers know she deserves to be placed in a category all her own.

Her stage presence is an equal mix of adorable and no holds barred badass. She smiled and giggled in between songs, engaging the audience while becoming more endearing, but the second she started a new track, she was in her zone and didn’t look back. Her raps are on key and her rhyming is better than most.

She even adds crazy antics, like dressing up in a cow costume, for quirky, but not over-the-top, measure.

Still, the best part about Santigold’s performance is her respect for the crowd. Her genuine love for her fans is apparent, even inviting a hoard of the audience on stage to dance with her during her best song of the night, “Creator.”

Her performance was for them, and her fans gave her nothing but love in return.

Other noteworthy performances
Frank Ocean – People have already thrown the “album of the year” title around for Frank Ocean’s full-length “Channel Orange,” but the “performer of the year” might be more like it.

His performance style is just like his songs — smooth, sexy and soulful on a whole other level– but hearing his tracks live, with his piercing falsettos and obviously thoughtful lyrics, only make them that more charged.

With his nearly 10-minute finale song, “Pyramids,” he had the entire audience completely engaged, moving to the beat all while staying fixated on him. The highlight of his set, though, was in Ocean himself, as his music proves to be a cathartic expression of his thoughts and emotions.

While referencing his Tumblr post discussing his bisexuality before beginning the raw “Bad Religion,” he said “It’s taken the fear away, so thank you.” His music is his art and an open diary, and the audience received and accepted it with open arms.

Bloc Party — Bloc Party had to battle the 7 p.m. time spot with fellow British rock band Franz Ferdinand, but their performance was more than worth the sacrifice.
It may be tough for the band to ever live up to the level of success they had with 2005’s “Silent Alarm,” but their performance proved they’ll fight for it until there’s nothing left in them.

Performing a mix of new material, like single “Octopus” from their upcoming LP, as well as classics like danceable “Flux” and their biggest hit to date, “Helicopter,” Bloc Party showed they had what it takes back then and are using that momentum as a jumping ground for bigger and better material.

Chief Keef – Possibly the most famous (or, in some people’s opinion, infamous) 16-year-old rapper with a record deal but no album (yet), Chief Keef has everyone talking. Whether or not they have something good to say doesn’t seem to affect him, as he keeps doing his thing with no regrets.

After making a surprise appearance at Pitchfork earlier this month, Chief Keef came back to represent his hometown as the opening act at the Perry’s stage. Keef rapped the few songs he’s known for, like “Everyday” and his biggest claim to fame yet, “I Don’t Like,” all while a largely unnecessary group of his friends, who did nothing but make the rapper look insecure and distract from what would otherwise be a better-than-average performance, stood on stage.

Still, Chief Keef is young, and like many rappers before him, will grow as a performer with time. But for now, he’s made a smash impact.

Rain delay – One of the biggest unexpected performers was Mother Nature herself, rockin’ out Saturday afternoon with some heavy rainfall, crazy winds and a fair share of lightning. Attendees raced to find exits and places to take shelter from the short chaos-causing storm.

Bands like Empires and Chairlift were assigned new performance times during Sunday evening, while others like Alabama Shakes were canceled completely with the promise that they will return to Chicago at a later date.