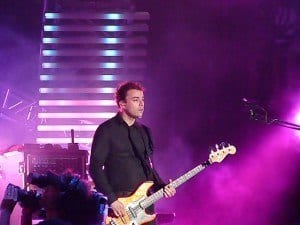 This Friday, Lollapalooza will mark its 10th anniversary in Chicago.

The three-day weekend event will kick off with a lineup including Eminem, Outkast, and Kings of Leon among many others.

Lollapalooza started back in 1991 by Perry Farrell, lead singer of Jane’s Addiction. It was previously a tour but from 1997 until 2003 Lollapalooza experienced a hiatus. The event was cancelled in 2004 just weeks before it was scheduled to take place due to poor ticket sales, but in 2005 it was revived and came to Chicago’s lakefront Grant Park where several musical artists performed on two stages over the course of two days.

In 2005, Chicago city leaders decided to let Lollapalooza take over its beloved Grant Park, a wise decision by city officials that has benefited the city both culturally and financially.

It was no surprise that Lollapalooza would become an annual event after it returned the following year having added 130 musical acts that performed across nine stages with a capacity for 75,000 attendees.

This year, the numbers are far bigger.

Promoters of the event expect 100,000 fans each day with acts performing among eight stages.