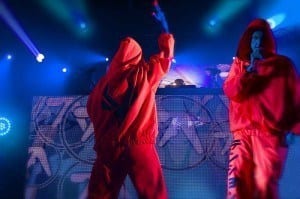 Standout performance:
Sharon Van Etten – Sharon Van Etten’s Lollapalooza set could have easily been mistaken as an exact copy of her records. That’s a rare performance quality to have, especially in today’s music industry where artists using auto tune are glorified and rewarded. But Van Etten’s voice doesn’t need help from any studio technique, and her Friday performance only solidified that. Songs like “Give Out” and “Leonard” proved to be her high points, with her quiet but powerful voice branching out on each end of the emotional spectrum. Van Etten really hit her stride with her hit “Serpents,” a breakup song that obviously hits home to her and was relatable to the audience.

Other noteworthy performances
Die Antwoord – There’s weird music, and then there’s Die Antwoord. This South African rap duo bounced around the Playstation stage with such bizarre enthusiasm and weird, cutting rhymes in a way only they could get away with.  But what else could you expect from the South African rap group that skyrocketed to fame thanks to Internet buzz and a word-of-mouth following? Songs like “I Fink U Freeky” and “Baby’s On Fire” had the entire packed audience bopping around, screaming the lyrics right back at front woman Yolandi Visser.

Passion Pit – The crowd swelled around the Bud Light stage for more than an hour before Passion Pit’s show, proving this band’s popularity has risen to new heights since their last album, 2009’s “Manners.”  Compared to previous performances, lead singer Michael Angelakos’ voice wasn’t up to its normal power as usual. Still, the crowd didn’t seem to mind and accepted the band’s performance as is. Passion Pit’s performance at Lollapalooza is still surprising, given the personal struggle with which Angelakos is currently dealing. In an interview done with Rolling Stone during the festival, he revealed the vague mental issue behind Passion Pit’s cancellation of a bulk of their tours: a severe, debilitating case of bipolar disorder that he has since he was 18 years old. But Angelakos is a fighter and will only continue to give it his all with future performances.