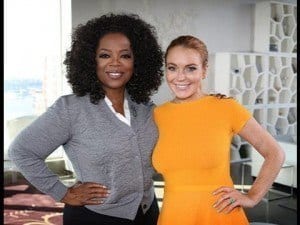 Lindsay Lohan’s new reality series debuted on the OWN network.

Lindsay Lohan is infamous for her hard partying, addiction, convictions and severe lack of common sense or self-control. Lindsay Lohan, a once-legitimately talented actress, has become a cautionary tale of young Hollywood. Lohan has six rehab stays, multiple arrests, convictions and probation violations under her belt, and every time the public starts to root for her, she goes and inexplicably puts herself back at square one. Lindsay Lohan has been given more chances than is seemingly acceptable and she realizes that—or so she says.

Lindsay Lohan’s docu-series premiered on OWN Sunday night. Many people were shocked that Oprah Winfrey, one of the most successful women in the world, would put her faith in Lohan given the girl’s disaster of a track record. The episode opened with Oprah interviewing Lindsay Lohan, who claimed that she wanted to “show the real me” and “ to live life with integrity.”

For the most part, the show is pretty tame. It follows Lindsay Lohan and her wranglers (which includes her sober coach—who isn’t convinced that Lohan is sober) mere days after she was released from her latest rehab stay in Malibu. Lohan packs up her stuff and returns to New York, where she tries to find an apartment. She claims she needs to be settled and can no longer live in hotels, because the instability helps enable her behavior. It’s small gems of entitlement and inability to take responsibility for her actions like this that made viewers roll their eyes. The most telling part of the episode is when Lindsay Lohan complains that the judge refused to release her from jail even though there was overcrowding because “an example needed to be made” of her. Lohan fails to see that maybe her jail stay was extended because she committed a multitude of crimes and actually deserved jail time. It seems that thought never crossed her mind.

Another cringe-worthy moment came from Lindsay Lohan’s mother, Dina. As she helps Lohan unpack boxes, they come across a t-shirt with the word “Fetch” printed on it. “Fetch” has been a decade-long joke from “Mean Girls,” which was Lindsay Lohan’s biggest hit at the height of her career. However, Dina doesn’t get it. It’s painful to watch Lindsay Lohan explain to her mother that it’s a line from “Mean Girls,” as it is the most successful film her daughter has ever done and the success of the movie no doubt paid for Dina’s house. Moments like this make the viewers feel bad for Lindsay Lohan.

All in all, the episode was relatively dull. People expecting “Jersey Shore”-style debauchery are out of luck. However, Lohan’s unprofessional and selfish nature seems more prevalent in the preview for next week’s episode, as she refuses to film and enrages Oprah Winfrey. The problem is that Lohan seems to have finally run out of luck and the public just doesn’t care enough either way.