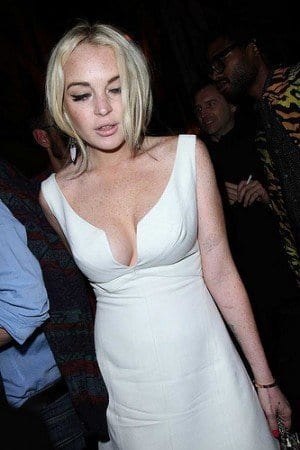 Lindsay Lohan’s Playboy cover has leaked online and it is definitely garnering her some attention.

The Insider leaked a photo of the cover on Wednesday, a week ahead of its scheduled release. For the cover, Lohan seems to be channeling past pin-ups like Marilyn Monroe and Jayne Mansfield. Lohan’s hair is platinum blonde and a red Playboy bunny chair strategically covers her body.

Lohan is expected to reveal the Playboy spread on the Dec. 15 episode of “The Ellen DeGeneres Show.” Lohan reportedly received $1 million for the shoot.

“The pictorial is absolutely fantastic and very tasteful, and will be accompanied by an interview that will let readers see another side of Lindsay,” Lohan’s publicist Steve Honig said  of the Playboy spread.

Check out Lindsay Lohan’s Playboy cover for yourself here.