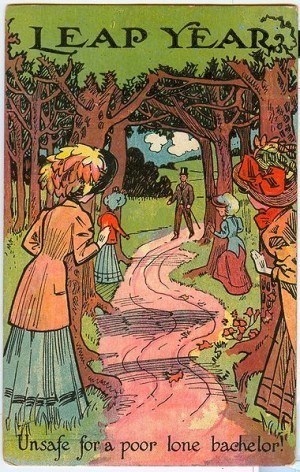 Leap Year: confusing our calendars, and birthdays, for more than 2000 years

Leap Year is a challenge that has been perplexing mankind since Julius Caesar’s astronomer, Sosigenes, developed the Julian calendar in 45 B.C.

Lear Year is based on the fact that it takes the earth 365 days, 5 hours, 48 minutes and 46 seconds to revolve around the sun. This amount of time was rounded to 365 ¼ days, so the Julian calendar year was 365 days, with one “leap day” added every four years.

The problem was, 365 days, 5 hours, 48 minutes and 46 seconds doesn’t exactly equal 365 ¼ days. After more than one thousand years, the error added up. Even with the Leap Year method, 10 days eventually built up.

It wasn’t until 1582 that Pope Gregory XII noticed that the spring equinox—when day and night are equal in length—fell on March 11 instead of March 21. To fix the problem, the Pope decided to simply erase ten days. Therefore, the day after October 4, 1582 was October 15, 1582.

This is, incidentally, the reason we now have the Gregorian calendar, though some Orthodox churches still use the Julian calendar.

Okay, now we know a little more about where the Leap Year came from, but here is where it gets more confusing.

Every year that ends in double zeros, and is divisible by 400 is a Leap Year. 1900 was not a Leap Year, but 2000 was. That means someone born on Leap Day 1896 did not have another birthday until 1904. Eight years is a long time not to have a birthday.

Leap Year babies, known as Leapers, do have the novelty of being only a quarter of their actual age.

Mary Ann Brown, born February 29, 1932, is the founder of the Worldwide Leap Year Festival. The festival has been held every fourth year since 1988. She will be celebrating her 20th birthday tomorrow, even though she is 80 years old.

Leapers do have some rather unusual problems that the rest of us probably never think about. For a lot of people February 29 is just another day, and probably just causes minor annoyances like, “What date did I write that check?”

Leapers have lobbied calendar companies to mark February 29 as a notable day. Facebook did not previously recognize February 29 as a legitimate birth date until leapers convinced them to make a change.

Statistics show that one in 1,461 people is born on February 29. There are more than 200,000 people in the United States whose birthdays fall on Leap Day, and a little less than 5 million worldwide.

Leap Year doesn’t just affect our calendars. In some cultures, tradition allows women to propose to their guys only in a Leap Year, but it is also considered unlucky to marry in a Leap Year.

Can we make the Leap Year, and Leap Day, conversation even more baffling? It’s already Leap Day in Australia. It’s summer there, too.