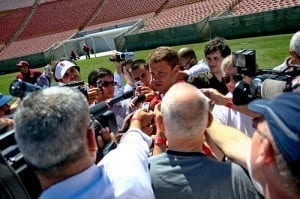 Lane Kiffin is officially headed to the unemployment lines. Up until the sun began to rise on Sunday, Kiffin was the head coach of University of Southern California’s football team, until USC’s athletic director Pat Haden gave his head coach the axe. An employment termination was inevitable for Kiffin considering his track record during his career with the Trojans.

Kiffin had lost seven of the last eleven games played and last Saturday was no different with a cringe-worthy loss against Arizona State with a 62-41 outcome. Lane Kiffin’s previous employment history is impressive, but the outcome often turned out like this one, implying maybe Kiffin is in the wrong line of work.

In 2007, Lane Kiffin became one of the youngest head coaches to ever be in the NFL when Raiders owner, Al Davis, hired him. His head-coaching career ended on a sour note when Davis fired Kiffin over the phone after his first season as coach ended with a 4-12 record. At the press conference following the firing, Davis called Kiffin a “flat out liar” and accused him of “bringing disgrace to the organization.”

During a press conference following the official announcement of this most recent firing, Pat Haden was a lot less slanderous than Al Davis. “My job is to what’s best for USC,” he said. “I personally have a great deal of a respect for Lane…He did the absolute best he can. Lane was clearly disappointed. He really, really tried to keep his job.”

Kiffin’s firing was became a vocal plea after a devastating loss against Washington State that left them with a 10-7 score on September 7. Fans were heard chanting the foreshadowing words “Fire Kiffin” as the disappointed team left the stadium.

Snoop Dogg’s son, Cordell Broadus also vocalized his support for the recent firing. The talented high-school junior is one of the best wide receivers in the nation, making him a top pick from USC when recruitment comes around.  According to 247 Sports, Broadus ranks as the sixth best receiver in California in the class of 2015.

Broadus said, “I feel that he should have been fired a while ago and USC is going to raise the bar now because the new coaching staff next year and I’m anxious to see what they’re going to look like.”

Haden has placed his faith with assistant head coach Ed Orgeron, who will be named the interim coach. Orgeron was formerly the head coach at Ole Miss before he was fired in 2007, leaving with a 10-25 record.