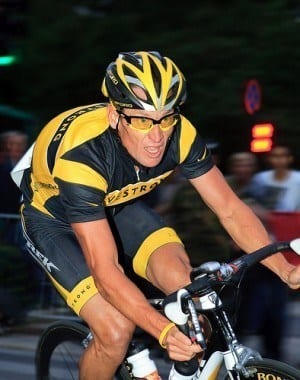 As evidence in the doping case is made public, the cyclist watches his sponsors distance themselves one by one

Lance Armstrong is left virtually on his own as a majority of his sponsors announced Wednesday that they will be dropping the cyclist after evidence for the USADA doping allegations were made public. Nike Inc., RadioShack Corp., Anheuser-Busch and Trek, amongst others, have all chosen to distance themselves from Armstrong, some terminating their contracts outright and some subtly stating that they will not be renewing their contracts with him.

Lance Armstrong also announced Wednesday that he will be stepping down as the chairman of his cancer foundation, Livestrong, handing over the responsibility to founding chairman and vice chairman Jeff Garvey.

All this came about a week after the United States Anti-Doping Agency publicly released evidence that Lance Armstrong was in fact at the center of an organized doping program, the New York Times reported.  Armstrong had chosen not to pursue a case against USADA’s allegations, denying his involvement with any sort of doping program. The USADA has stripped Lance Armstrong of his seven Tour de France titles and banned him from competing for life.

Nike stuck by Tiger Woods and Kobe Bryant during their scandals, but has said that the evidence speaks for itself and Armstrong’s dealings are directly associated with his performance in his sport. Trek, maker of every bicycle and all equipment Lance Armstrong rode to victory with in all seven Tour de Frances, has ended their relationship as well, saying they were “disappointed” with the evidence against the athlete. He will, however, be able to maintain the small stake he has in the company.

Livestrong, despite the Lance Armstrong situation, continues to be a well-respected company and Nike said it would continue to support “Livestrong initiatives.”

It all prompts the question, what’s next for this shamed cyclist?