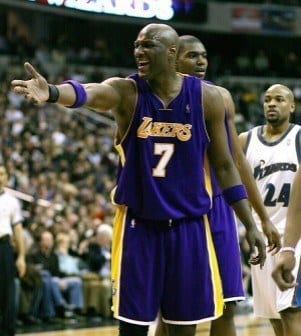 Lamar Odom has been dealt to the Dallas Mavericks.

ESPN reports that Odom will join the Mavericks after a rollercoaster of a weekend for the NBA. Originally, Odom was included in a three-team trade for Chris Paul, but the move was vetoed by the NBA. Odom was then dealt to Dallas on Sunday.

“Right now, for me, having Odom, Dirk Nowitzki, Shawn Marion, we may have the best forward trio in this league right now. And that’s exciting,” Mavericks coach Rick Carlisle said. “Lamar Odom is a guy we have great respect for as a person and as an all-around player in this league. We feel he’s going to add so many different dimensions for us — length, playmaking, scoring, experience, championship experience.”

Although Dallas is excited about the trade, Odom’s former teammates are not.

“To be honest with you, I don’t like it,” Kobe Bryant said. “It’s tough to lose Lamar. Pau (Gasol) is still here, and we’re all thankful for that. It’s hard when you’ve been through so many battles with players to just see them go somewhere else. It’s tough.”

Odom’s wife, Khloe Kardashian, has taken to Twitter in support of her hubby’s move, saying, “I am blessed and happy anywhere as long as I am with my family! God is great!! Blessed beyond words! I love ALL of my dolls!” and “I would go anywhere with my hubby!”