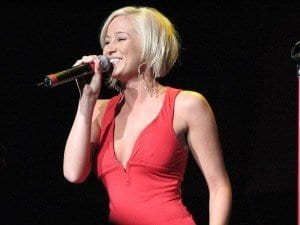 Country singer, Kellie Pickler, appeared on Good Morning America sporting a new hairdo. The star shaved her head in support of her best friend, Summer Holt Miller. The 35-year-old was diagnosed with breast cancer this past June and has since undergone a double mastectomy.

Kellie Pickler began her singing career and rise to fame on American Idol in 2006 where she almost made it into the top five. Since her appearance on Idol, she has released three Billboard 200 Top 10 albums.

Pickler calls Miller her sister and is happy to shave her head in support of her friend. The singer also hopes to spread awareness and emphasize the importance of early detection of breast cancer.

When Kellie Pickler and Miller got together to shave off their locks, Pickler stated, “Cancer does not discriminate.” Miller went on to say, “If this compels even one person to change their mentality toward waiting until the age of 40 for their mammogram, then it will be worth it.”

Summer Holt Miller, mother of two, insisted on a mammogram due to her family’s history of breast cancer. Fortunately, her cancer had been caught early, which increased her chances of long-term survival immensely.

According to the Centers for Disease Control and Prevention, breast cancer is the most common form of cancer among women and the second leading cause of death among women. A mammogram is the best way to detect cancer in its earliest stages.