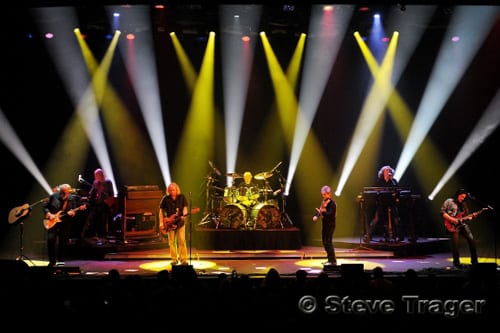 Out of the limelight for a while, classic rock icons, Kansas, recently returned to the touring cycle promoting a brand new CD entitled The Prelude Implicit—a first for this great band in more than 16 years. Kansas has catalog relics that span generations. With a great new record under their belt to promote on this tour, the band is also celebrating a milestone with the 40th Anniversary of their 4th studio album, Leftoverture (1976). This album captivated music fans with songs such as Carry on Wayward Son and Dust In The Wind, shredding an array of melodies and epic lyrics.

You might also enjoy: Don Felder at Sugaar House Review

Kansas at the Merriam Theater

Besides their current lineup, Kansas now feature a new vocalist. Ronnie Platt certainly captures that old, unique sound that we fans have grown accustomed to after decades of hearing this band unfold. Still holding their true “classic rock” sound intact, Kansas recently performed at The Merriam Theater, an intimate venue in the heart of Philadelphia, PA.

In celebration of Leftoverture, Kansas recreated their familiar clean and iconic sound, performing this masterpiece in its entirety alongside several new tracks rounding out this amazing, intimate tour.
Kansas strips down their production from the “arena rock” standard, delivering a show that gave the true rock fan their own epic, up close and personal experience.

Perhaps when any band takes to the stage right on time and delivers a great show, it’s a great moment. But when Kansas opened their set with a handful of new acoustic songs performed by their new vocalist, my senses were definitely stimulated.

While being entertained with the band’s new material, I thought to myself for a brief moment “how will the new vocalist shine with Leftoverture in its entirety, live, for the first time?”

Then the opening intro medley began to sound, and Ronnie sang Carry on Wayward Son, never missing a beat with his clean and crisp vocals. From then on, every song performed from this record sounded spectacular including the grand encore song, Portrait (He Knew).

While Kansas have gone through lineup changes to continue being a band that tours for years to come, we certainly appreciate all these great songs pulled out in concert time after time. It’s great to see Kansas still holding their true sound yet simultaneously captivating fans with exciting new material.

If you indulge in classic rock, like many of us do (which sometimes shows our age but age is timeless, as they say), but couldn’t make this great tour, you definitely missed a classic show.

Read: The Baha Men are Back!