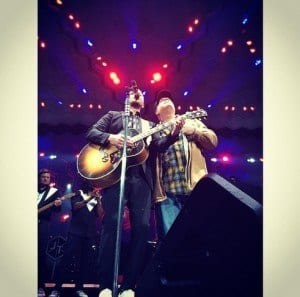 Justin Timberlake surprised fans at his show in Chesapeake Energy Arena in Oklahoma City where he performed an unexpected cover of Garth Brooks’ “Friends In Low Places.”

This past week he attempted the song for a second time and was joined on stage by none other than the man himself at his sold-out show at the Bridgestone Arena in Nashville. Timberlake began the song as fans sang along before Brooks joined in for the second verse supported by a backup band.

The two sang an extended version of the song which span over six minutes. The show was one of many on Timberlake’s 20/20 Experience World Tour which kicked off in Nov. 2013 and wraps up just after New Year’s.

Brooks on the other hand, released Man Against Machine, his first studio album in over a decade this past November and has been spontaneously announcing concert dates.

Check out a video from the sold-out show and iconic duet at the Bridgestone Arena in Music City here.