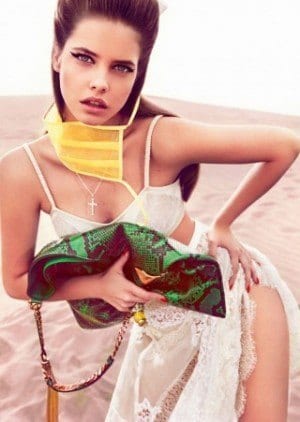 Now that Justin Bieber and girlfriend of two years, Selena Gomez, have gone their separate ways, there are rumors flying that Justin may have found a new girl already.  According to E! News, Bieber and Hungarian Victoria’s Secret model, Barbara Palvin, were spotted together on Thursday at the Broadway performance of The Lion King.

The 19-year-old model also appeared in a photo with Bieber following his performance at the Victoria’s Secret Fashion Show in New York last week. However, Palvin is denying that the two are an item.

On Friday, she tweeted “hey everyone. please calm down. he is all yours!! please” followed by “last time I’m saying it. please calm down. there is nothing going on w him. I met him and did a pic w him. wouldn’t you do the same? #friendship.”

Bieber also retweeted a message from Palvin last week that read “Today is Showtime! #VSfashionshow @VictoriasSecret with @rihanna @justinbieber @brunomars and all the beautiful girls! Yeeyy!”

Although he did not speak out on his relationship with the Victoria’s Secret model, he did speak about his recent split with Selena Gomez. Bieber said, “I don’t know what to say. I don’t know if really—if you even know what’s going on in my life, so to even assess that doesn’t make any sense, because I’ve not made any comments.”

Much like Justin Bieber, Barbara Palvin was discovered at the young age of 13 and was later walking the runways of Louis Vuitton and Prada. Last year, she was named ambassador of L’Oreal Paris and appeared as the face of its Rouge Caresse lipstick.