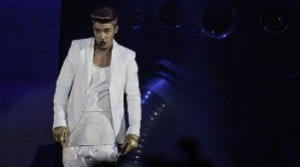 Justin Bieber was arrested early Thursday morning in Miami Beach after he was caught drag racing and failed a field sobriety test. Justin Bieber and a friend were pulled over shortly after leaving a nightclub when cops found the duo racing red and yellow Lamborghinis. This dangerous spectacle comes on the heels of Justin Bieber causing over $20,000 in damage to his neighbor’s Calabasas home after he and his posse pelted the residence with eggs.

Justin Bieber’s neighbors called the cops and the egging resulted in a search warrant being issued and Bieber’s best friend, Lil’ Za being arrested for cocaine possession.  However, Justin Bieber has been on a downward spiral for the past year. At only 19, Justin Bieber is one of the most successful pop music acts ever. However, as is often the case with a meteoric climb, it was quickly followed by an epic fall. As of late, Justin Bieber routinely gets into scuffles with the paparazzi, including an incident where Justin Bieber had to be restrained by his own bodyguard while threatening to “beat the f**k” out of a photographer in London. Not only that but he has faced a very public breakup with fellow teen-sensation, Selena Gomez, as well as photographic proof of   Bieber smoking pot and possibly abusing “purple drank” with friends.

The pint-sized pop star’s entitled behavior seems to have finally caught up with him. Justin Bieber is currently being booked and processed where he will await a bail hearing. This story will be updated as more details become available.