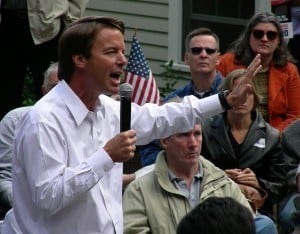 John Edwards was not called to the witness stand before the defense rested their case Wednesday morning.

John Edwards and onetime mistress and Rielle Hunter have stayed silent in the case against Sen. John Edwards that is looking to punish him for accepting up to $1 million from two donors in an effort to hide his then-pregnant mistress from his wife and supporters.

The financial corruption trial against John Edwards has yet to see the prosecution, who has the opportunity to call rebuttal witnesses. After that, the jurors will see closing arguments from both sides.

John Edwards is facing six felony counts of accepting $1 million in unreported campaign donations at a time with the law stated that individual political contributions were limited to $2,300 for the election cycle.

Spectators were surprised to not see John Edwards on the stand. Kieran Shanahan, a former federal prosecutor who has been following the trial said, “Remember, the defense told this jury John Edwards is not afraid of the truth, and I think that was foretelling that he will take the stand.”

Shanahan said of the situation, “The only logical reason for making these payments at the time they were made was exactly what John Edwards has been saying: ‘I’m trying to protect my wife from finding out I’m the father of Rielle Hunter’s baby.”

MSNBC reported, “Another major point of the defense argument is that Edwards didn’t know what the money from Baron and billionaire oil heiress Rachel “Bunny” Mellon was being used for, a contention that was supported Tuesday by John Moylan, who worked in both of Edwards’ presidential campaigns. Moylan testified that Edwards was shocked to learn in August 2008 — several months after the fact — that Mellon had been paying to help support Hunter and keep her from the public eye. The money was given through checks falsely labeled as furniture purchases through Andrew Young, who was once a top aide to Edwards and is now his chief accuser.”