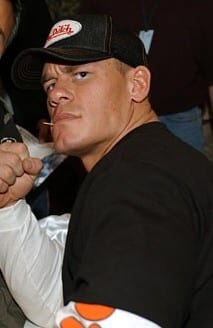 After a drawn out war between John Cena and his wife of three years, the couple’s divorce has come to a finalization. According to Contactmusic.com, John Cena and Elizabeth Huberdeau have settled their differences despite initial accusations between them, and the three-year marriage has come to a peaceful end.

Huberadeau accused the WWE wrestler of cheating on her in the past and initially disputed their prenuptial agreement.

The media are claiming the ex-wife of John Cena to have been “blind-sided.”

According to WebProNews, the goal of John Cena has been to move past the divorce, which he called in May, and to return to the ring without a chip on his shoulder.

Twitter is buzzing with theories on the divorce’s result. MeanButterfly wrote, “John Cena’s divorce is settled…Threw her some cash and said I’m out!!! Lol.”

Many are comparing John Cena and Elizabeth Huberdeau’s divorce to that of Katie Holmes and Tom Cruise. But while Cruise was also shocked by Holmes’s desire for divorce, he managed to stay away from the public eye.

Huberdeau did not make such efforts to avoid the media. But according to Entertainment and Stars, Huberdeau took back accusations regarding infidelity.

According to TMZ, the lawyer of John Cena’s ex-wife, Raymond Rafool said, “All matters [in the divorce] have been settled and resolved amicably.”