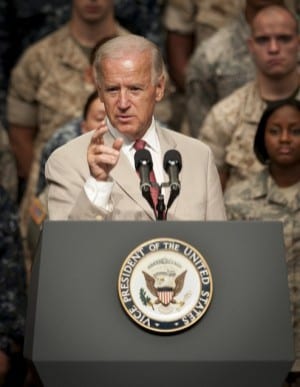 Joe Biden ignited a war of words with his unfortunate phrasing at a campaign event in Virginia Tuesday. The vice president is no stranger to gaffes and may even be the political embodiment of “foot in mouth.”

Joe Biden appeared at a campaign event in Virginia Tuesday and spoke of the Republican budget conceived in part by vice presidential candidate Paul Ryan. His ill-phrased comment has since sparked heated debate on both sides of the political aisle.

“We got a clear picture of what they all value,” said Vice President Joe Biden. “Every Republican’s voted for it. Look at what they value and look at their budget and what they’re proposing. Romney wants to let the – he said in the first hundred days he’s going to let the big banks once again write their own rules, ‘unchain Wall Street.’ They’re going to put y’all back in chains.”

GOP opponents immediately seized on this comment, focusing on the unintended racial undertone and reference to African-American’s shared misery at the hands of the institution of slavery. The Mitt Romney campaign has since said that the Obama re-election campaign had “reached a new low.”

“His campaign has resorted to diversions and distractions, to demagoguing and defaming others,” said Romney on the final stop of his Ohio bus tour. “It’s an old game in politics; what’s different this year is that the president is taking things to a new low.”

ABC’s Arlette Saenz reported that the vice president has said that he misspoke, intending to use the work “unshackle” instead of “unchain.” The GOP has used the word “unshackle” in the past, the veep stated.

“I’m told that when I made that comment earlier today in Danville, Virginia, the Romney campaign put out a tweet. You know, tweets these days? Put out a tweet, went on the airwaves saying, ‘Biden, he’s outrageous in saying that,’ I think I said instead of ‘unshackled,’ ‘unchained.’ ‘Outrageous to say that.’ That’s what we had. I’m using their own words. I got a message for them. If you want to know what’s outrageous, it’s their policies and the effects of their policies on middle class America. That’s what’s outrageous,” said Vice President Joe Biden in response to the criticism.

Regardless of what Joe Biden intended, his comment rubbed a number of the electorate the wrong way. Some have even remarked it could spell his end as President Obama’s running mate. Former Alaska Gov. Sarah Palin told Greta Van Susteren of Fox News that Biden’s comment should be considered “the nail in the coffin” for his spot on the Democratic ticket. Of course, only time will tell.