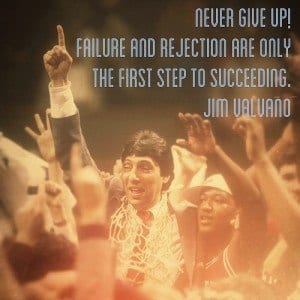 The first ESPY saw the last public moments of a legend

Jim Valvano delivered one of the most iconic speeches in sports history 20 years ago today, summoning ethereal strength at the stage of the first ESPY awards in Madison Square Garden to inspire the world to continue the fight against cancer.  Even as cancer racked Jim Valvano and he was unsure he could even make it to the awards ceremony, he presented himself as strong and passionate in his 12 minute acceptance speech.

Less than a year before Jim Valvano took the ESPY stage in 1993 to accept the inaugural Arthur Ashe Courage and Humanitarian Award he was diagnosed with bone cancer.  Dick Vitale, a friend of Jim Valvano that encouraged and convinced him to make it to the awards show, thinks back, “I remember how sick Jimmy was that evening.  I honestly did not know how he was going to make it up to the stage, and I remember standing next to him, in total awe as he spoke.”

Jim Valvano overcame the immediate symptoms of his illness to inspire the sports community, cancer victims, and anyone that would listen to continue to live with positivity and passion.

“I just got one last thing, I urge all of you, all of you, to enjoy your life, the precious moments you have,” Valvano said. “To spend each day with some laughter and some thought, to get your emotions going. To be enthusiastic every day and as Ralph Waldo Emerson said, ‘Nothing great could be accomplished without enthusiasm,’ to keep your dreams alive in spite of problems whatever you have. The ability to be able to work hard for your dreams to come true, to become a reality.”

Jim Valvano started the V Foundation, which has raised over $120 million with the legacy and memory of the sports legend as its soaring inspiration.  Eight weeks after his speech, Jim Valvano passed away at age 47, but his resonating words, “Don’t give up.  Don’t ever give up!” live on to inspire the battle against cancer.