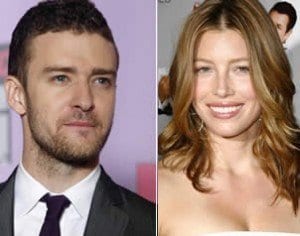 Justin Timberlake hosted Saturday Night Live this past weekend. The singer/actor has already joined the “5-timer club” amongst other SNL hosts like Alec Balwin and Steve Martin. This time would be unique though, considering it’s his first appearance on SNL since his recent engagement with Jessica Biel. After the show the two attended a private party where Biel was reported flaunting her ring.

Timberlake is suspected to have proposed to Biel during December when the two visited Jackson Hole, Wyoming. A source told UsMagazine, “Justin knows how much she loves snowboarding and the mountains, so it was the perfect place.” Another source spotted the two later at The Hungry Moose, a local grocery store in Big Sky, Montana, where the two continued their engagement doing exactly what Jess “loves.”

Biel has done a good job since then keeping her ring kept under wraps but at last nights party she could not help but show it off. Kristen Bell, an actress in attendance said she, “loved the ring and chatted her up about it.” Other’s told Us that Biel and Timberlake performed in a way you’d expect an engaged couple would, “holding hands,” the former N’Sync and “7th Heaven” stars even “kissed a few times in front of the crew.”

The ring is said to be “custom made” just for Jessica and the date the two will wed has not been released yet, although, even JT’s grandmother can’t contain her excitement in welcoming Jessica to the family, ”She’s a wonderful campaigner for the environment and Justin is too, a fine young man. Jessica will be a lovely member of the family.”