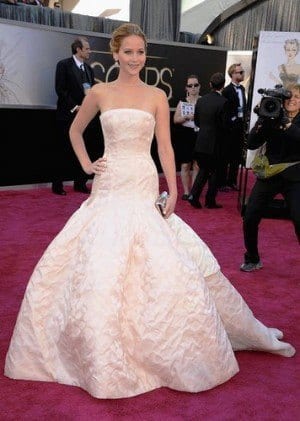 Jennifer Lawrence takes names and tumbles on her way to gold

Jennifer Lawrence got her first Oscar for her role as Tiffany, a young widow, in “Silver Linings Playbook.”  Starring opposite Bradley Cooper, Jennifer Lawrence played a radically different role from the Katniss Everdeen her fans know and love, the other character for which she has received an Oscar nomination.

Jennifer Lawrence worked hard for her little gold man.  Other big name actresses that competed for the honor were Jessica Chastain in “Zero Dark Thirty,” Emmanuelle Rive in “Amour,” Naomi Watts in “The Impossible” and Quvenzhane Wallis in “Beasts of the Southern Wild.”

Notable moments during Jennifer Lawrence’s acceptance were her high hopes to forward mental health healing efforts and her crowd cringing “oops” moment on the way to her award.  Jennifer Lawrence took a pretty big tumble on the way up to the stairs, a stutter she attributed to her beautiful blush Dior gown.  She handled the fall gracefully, joking afterwards, “What do you mean what happened? Look at my dress! I tried to walk upstairs in this dress, that’s what happened! I stepped on the fabric, and I think they wax the stairs.”  As for mental health, the cheerful and altruistic Jennifer Lawrence remarked in connection with “Silver Linings,” “I don’t think we’re going to stop until we get rid of the stigma for mental illness. I know David won’t. And I hope that this helps. It’s so bizarre how in this world, if you have asthma, you take asthma medicine; if you have diabetes, you take diabetes medicine; but as soon as you have to take medication for your mind, there’s such a stigma behind it.”