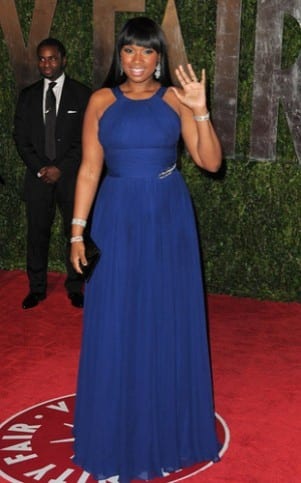 Jennifer Hudson gave a heartwrenching performance in tribute of one of her idol, Whitney Houston, during the Grammys on Sunday.  Houston was found dead in her L.A. hotel room the day before the awards show.  Jennifer Hudson agreed to do the performance with only hours to prepare.  Mulitple reports say that she repeatedly broke down in tears during rehearsals.

Jennifer Hudson’s beautiful silhouette appeared center stage as she began to sing, “I Will Always Love You,” a capella.  Hudson looked stunning in a simple, fitted black gown embellished with a few rows of diamonds on the chest.  Though she was visibly emotional from the start, Hudson managed to hit every note, giving an amazing and heartfelt performance.  Hudson even changed the ending lyrics to, “Whitney, Whitney, we love you.”  According to NY Daily News, LL Cool J told People magazine before the show, “She’s [Hudson] the closest thing we have now to what Whitney was.”

The performance was emotional for Jennifer Hudson for many reasons.  Houston was not only her idol, but was the person who presented Hudson with her first Grammy which she won for Best R&B Album in 2009.

Jennifer Hudson was originally supposed to be paired with Chaka Khan to sing the tribute as a duet, but she dropped out at the last minute and gave her reason via twitter, “As I grieve the loss of my friend and “little sister,” I don’t feel it appropriate to perform at this time.  Continue to pray for the family.”

Whitney Houston’s official cause of death will be unknown for a couple weeks.  The autopsy has been performed but a toxicology report usually takes four to six weeks to be completed.  Rumors and speculations say that Houston had mixed pills, possibly Xanax among other prescriptions, with alcohol.  Other speculations say that Houston had passed out from the drug and alcohol concoction in the bathtub and drowned because she was allegedly found submerged in the tub.  Rolling Stones reports that, “reports are surfacing suggesting the singer died from a lethal combination of prescription drugs and alcohol…officials told Houston’s family there was not enough water in her lungs to suggest drowning.”  Other reports say that Houston had indeed been found submerged but that she most likely died before she slipped under the water.