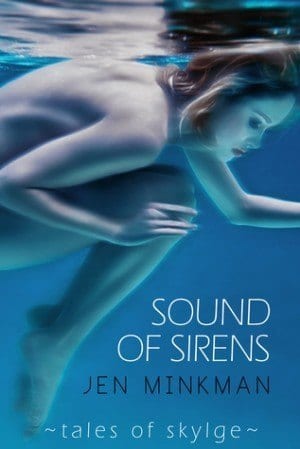 After finishing Jen Minkman’s The Island series, I was stunned by how differently Sound of Sirens reads in comparison to the ones in her former series, possibly because in this novel, possibly because Minkman draws inspiration from the history of her home country, the Netherlands. Sound of Sirens is well written, and while it took a while to set up, I loved the characters and the cultural and geographical details incorporated throughout the book.

Sound of Sirens takes place in an island in which two groups of people live: the Currents and the Skylgers. The Currents are the rich ruling class who came from across the sea, while Skylgers are natives to the island. Electricity exists, but the Currents hoard it. The island is surrounded by mysterious merfolk whose siren calls lead hypnotized island folk to their watery doom. It seems that neither Currents nor Skylgers are immune to the call of the Siren.

Enna, the Skygler main character, is the daughter of a woman who died after heeding the Siren’s call. After her brother who returned from a long voyage gives her an LP that can only be played by electric devices, she befriends a Current guy named Royce. Who’s hot. And popular with the girls. And somehow indifferent to all except Enna.

Thus begins a taboo Skygler-Current relationship, meanwhile Enna learns more about the monopoly that the Currents hold over electricity, and that there is more to the history of the island of Skylge than what was taught in history class.

Sometimes Enna comes close to falling into what I consider the “Bella Complex” in which she considers herself plain compared to Royce, and Royce is such a girl magnet that it’s a wonder he doesn’t sparkle in the sunlight.

However, she is not a Bella, because she’s curious and passionate about the larger politics of the island. She doesn’t want to hide or even defend herself from the scary politics; she wants to change the bigger picture–proactively. She wants to learn more about the history. She is proud of her Skylger culture and language, which is slowly disappearing beneath the Current rule.

The language in this book is simplistic and minimalist, and compared to her other series, Minkman writes with more familiarity about the details of Skylge because she is drawing ideas from her home country this time. It took some time to set up the world and its conflicts, but not too long. Once the island of Skylge was established, I wanted to find out how far Enna would go to discover the truths of the island, and how far the Currents would go to protect the status quo.

Find out more about Sound of Sirens by Jen Minkman on Goodreads.