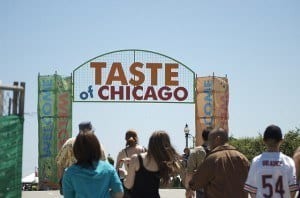 At the beginning of July every summer, Grant Park hosts crowds of people and cuisine for the beloved event The Taste of Chicago. Besides having over thirty different food stalls, The Taste of Chicago, or the Taste as many simply refer to it as, also has live music. This year, The Taste came with an extraordinary lineup particularly scoring headlining spots for Janelle Monae and Aloe Blacc.

The Taste uses the Petrillo Music Shell on the north side of Grant Park, which is also a vital stage for Lollapalooza, Chicago’s huge three-day music festival in August. The audience is kept to a limited amount of rows and chairs for paying customers, while having free space in Butler Park right behind. The lineup had two or three bands performing each day. Janelle Monae and Gary Clark Jr. were lined up together while The Wailers opened for Aloe Blacc on the closing day.

Before Gary Clark Jr. came out to start things off, The Taste began with the national anthem. A little girl about age ten came out and gave a rousing rendition, and while I was confused by this procedure, the girl had pipes.

Then out came Gary Clark Jr. and his band. He stuck to a pretty classical blues approach with a backup guitarist, drummer, bassist and himself as lead guitar and lead singer. Right off the bat, they came out with a hard, slow blues jam that was reminiscent of more relaxed Stevie Ray Vaughan.

He played a lot of different styles of blues songs. He worked his way around the classic twelve bar form, turnarounds and all, while showing he knew what to do with a slide. Everybody, the band and the crowd, all seemed to revolve around his energy. At one point, the whole first row was nodding their heads in rhythm while a little kid jumped around with no worries.

Gary Clark Jr. also showed his vocal range on a couple songs hitting high notes and singing in a perfect pitch falsetto that made the crowd melt. At this moment, I spotted Rahm Emanuel, Chicago’s Mayor, walking around and shaking hands. Who knew he was a blues fan?

After the band closed out their set with a ruckus jam, the mood was finally set for Janelle Monae.

Quickly becoming one of modern R&B’s biggest stars, Monae is known for her live shows and energy that she brings every night. I first saw her back in 2010 when she was on tour with Of Montreal and could not wait to see how she had progressed as a performer.

What followed completely exceeded my high expectations. Her live performance and her music have always had theatrical elements. This proved to be true on this occasion as well. To start the show, her version of a hype man came out in a white suit and greeted the audience.

“I wish I had the time to get to know each and every one of you individually, but unfortunately we don’t have that much time. So instead, I want everybody to shout out your name on the count of three.”

The show was incredible in every aspect. The chemistry of the band could not be clearer and the way Monae engaged the crowd was virtuosic. She put herself one hundred percent into the live performance playing her character of android lover, but at times also delving into her personal life.

One story she shared was the inspiration behind her song “Victory” which is off her latest album Electric Lady. She told the crowd how she wrote the song for the working class and the people who were living check to check. Her personal story made the high notes and chorus line of “Just to be victorious/you must find glory in the little things” resonate throughout the crowd on a deeper level.

She closed the show out with “Come Alive (War Of The Roses)” from her first full-length studio album The ArchAndroid. At the end of the song, she ran through the crowd holding a baby, jumped on her hypeman’s back and rode off into the sunset.

Actually it was just back on stage.

Those two performances capped off an amazing first day at The Taste.

Three days later, I returned to see The Wailers and Aloe Blacc. The Wailers opened things up playing a medley of Reggae classics that even my seven-year-old cousins can sing by heart including “Buffalo Soldier,” “Could You Be Loved,” “Jamming” and “No Woman, No Cry.” It was easy to tell that they had their act down to a science.

His set was very personal as he talked a lot about his life story. This was a homecoming of sorts for him as his first internship was in Chicago. He worked for that same company until he got laid off and started taking music, which was just a hobby to him before that, very seriously.

“I just got laid off,” Blacc said recalling the moment, “but was promoted to CEO of my life.”

His narrative ran throughout his set in which he performed his first hit, “I Need A Dollar”  and finally getting to his bigger and more recent hits “Wake Me Up” and “The Man.” The legendary hip-hop producer Dr. Dre inspired “The Man,” after telling Blacc he liked his style and wanted him to go for it.

Blacc and his band, which consisted of a full horn section, drums, guitar, bass and keyboard were really cooking the whole show. At different times, Blacc would announce that he was just going to dance while he let the band play. After playing his big hits, he came out for an encore and did slowed down covers of Billie Jean and California Dreaming to ride out the end of his set.

All of the acts that performed at The Taste this year really delivered and brought something special to a festival that is mostly known for its food. This year I think it’s safe to say the jams were the tastiest thing at The Taste.