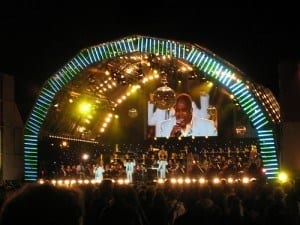 James Ellis, one of the voices behind ‘Disco Inferno,’ died on Thursday.

James Ellis, famous for helping sing the hit dance anthem “Disco Inferno” with the Trammps, died Thursday in South Carolina, according to CNN.

Ellis’ deep baritone contributed to the Grammy-winning song from the “Saturday Night Fever” album. The album is number two for best-selling soundtrack album of all times, right behind “The Bodyguard.” The album sold 15 million copies.

Though the Trammps had minor success prior to the release of “Disco Inferno” in 1976, the placement on the “Saturday Night Fever” soundtrack in 1977 gave them fame.

The soundtrack stayed No.1 on the charts for 24 consecutive weeks in 1978 and “Disco Inferno” climbed to No.11 on the Billboard Hot 100.

The group, who started in Philadelphia in 1972, failed to produce another hit as popular as “Disco Inferno” but continued to tour up until 2008 when Ellis health declined.

The group’s biography on allmusic.com says, “But the Trammps’ prowess can’t be measured by chart popularity. Ellis’ booming, joyous vocals brilliantly championed the celebratory fervor and atmosphere that made disco both loved and hated among music fans.”

According to USA Today, Ellis had been suffering from Alzheimer’s disease, up until his death and passed away in a nursing home.

Ellis’ memorial service will be held March 16 at Central Church of God in Charlotte, North Carolina.