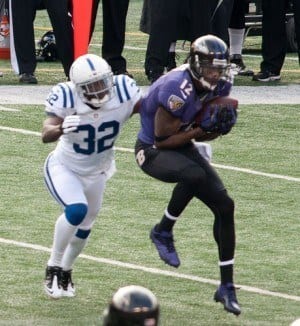 The New Orleans native proved his salt, swag and hospitality this Sunday

Jacoby Jones exhibited an eye-popping feat of athletic prowess and physical finesse at the 37th Super Bowl, setting a new standard with a record breaking 108 yard kickoff return against the San Francisco 49ers on Sunday night, and following up with celebration swagger, Kid President style.  The 28-year-old New Orleans native sped down the field to stretch the Baltimore Ravens lead to 28-6, and score his second personal touchdown during the game.

After the game, Jacoby Jones spoke on the straight shot afforded him by the Raven’s legendary defense, saying “Daylight, follow any avenue and it was daylight.”  Jacoby Jones also contributed to a second record break, as the Ravens became the first team with two Super Bowl kickoff returns for touchdowns.

He celebrated with personal swagger, while elated fans celebrated by giving out free swagger.  Gardners furniture, a Baltimore business, made good on their promise that any purchases made during certain times of the Super Bowl would be free if the Ravens scored a touchdown on a kickoff return.  Jacoby Jones may seem like an accidental Santa Claus to any of the families that received a slice of the $600,000 merch the store gave away for free.

Jacoby Jones was cut from the Houston Texans last May, in a “no-brainer” decision by G.M. Rick Smith that the team has probably come to regret, what with the energy and performance the wide receiver delivered on game day.  Meanwhile, Baltimore coach John Harbaugh is appreciative of Jacoby Jones, stating “Jacoby has been a blessing to this team and we are just so grateful to have him.”

Good juju also emanated from the star’s family, especially Mrs. Jones, who prepared home cooked stuffed bell peppers for the boys in the super Bowl run-up week.  More food allusions by Jacoby Jones himself, regarding playing in his home town, “It’s always the goal to win the Super Bowl and by me being able to come home and play, that was like icing on the cake. You can drop the cherry on it, the strawberry, and the sprinkles.”