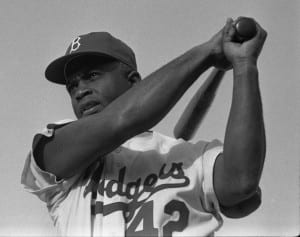 MLB remembers the man who broke the baseball color barrier

For those who are not avid baseball fans and have no clue who Jackie Robinson is, he was the first black major league baseball player of the modern era. He was initiated into the Brooklyn Dodgers on April 15, 1947. His debut in the MLB ended roughly 80 years of baseball segregation.

Although Jackie Robinson broke the baseball color line, he was the recipient of much cruelty from vicious fans and opposing teams. Robinson had promised the Dodgers owner and manager that he would hold his tongue and fists for at least his first two years in the major league, despite the continuing onslaught of abuse. One day the attack was so nasty that Harold “Pee Wee” Reese, shortstop for the Dodgers, walked over to Robinson and put his hand on his shoulder. He didn’t say anything, but the show of solidarity caused the hecklers to shut up.

Jackie Robinson was a talented baseball player. Over the course of ten seasons he played in six World Series and contributed to the Dodgers’ 1995 World championship. He won MLB Rookie of the Year in 1947 and National League Most Valuable Player Award in 1949 – the first black player to receive that honor. He was also selected for six consecutive All-Star Games from 1949 – 1954. Jackie Robinson was inducted into the Baseball Hall of Fame in 1962, and in 1997, MLB retired his uniform number across all major league teams.

Outside of baseball, Jackie Robinson was the first black television analyst in MLB and the first black vice-president of a major American corporation. He also helped establish the Freedom National Bank in the 1960s. He was posthumously awarded the Presidential Medal of Freedom and the Congressional Gold Medal in recognition of his achievements.