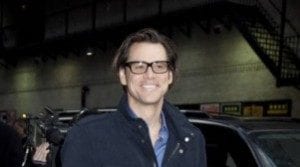 On Sunday night, “American Idol” showed us a slew of hopefuls auditioning in San Diego for a chance to go to Hollywood and begin to compete for the show’s title.
According to Yahoo!,  one of these hopefuls was Jane Carrey, the 24-year-old daughter of comedic actor Jim Carrey.

Jim Carrey once appeared on “In Living Color” with “Idol” judge Jennifer Lopez.  Jane acknowledged the association, but quickly reminded the panel this audition was about her with the quip, “I was two when you were on TV together.”

Jane impressed the judges and was granted the coveted “golden ticket”, her pass to participate in the Hollywood round of the competition.

Jane is the only child of Jim Carrey and former actress Melissa Womer, who were married from 1987 to1995.  Jane is married to musician Alex Santana, who performs with the group Blood Money under the name “Nitro”.  In February 2010, the couple welcomed their first child Jackson Riley Santana.