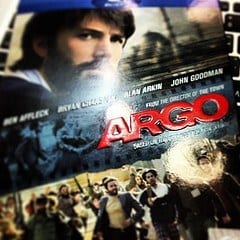 Iran: film is “[an] attack against our nation”

The American tradition of filing frivolous lawsuits seems to have taken root overseas, albeit in an unlikely place…the Middle East.

Iran state media reported Tuesday that the country is intent on suing Hollywood over the film “Argo” due to the film’s “unrealistic portrayal” (Iran’s words) of the country.

French lawyer Isabelle Coutant-Peyre is handling the lawsuit, according to Iranian news outlet Shargh Daily. She is reportedly in Iran engaging in discussions with leaders concerning the logistics of filing the suit. Notably, she is also the lawyer for Carlos the Jackal, a terrorist currently serving a life term for an attack that killed 11 people.

The goal of the suit is to block the distribution of the movie.

“We will be able to block distributors of the movie, force them to apologize and challenge them to confess that the movie is nothing but a sheer lie,” Coutant-Peyre told the Associated Press.

Iranian officials long ago dismissed “Argo” as a pro-CIA, anti-Iran film laden with American propaganda. Iran hasn’t allowed the movie to be shown in theaters, but the Associated Press reports that many Iranians have seen the film and are angry about the portrayal of events in the film.

It was only recently that Iranian cultural officials gathered in a theater to watch the film. Shortly after, the movie was deemed by Iran to be “a violation of international cultural norms” and “[an] attack against our nation and entire humanity,” according to the Associated Press report.

“Argo” details the 1979 Iranian hostage crisis, when the U.S. Embassy in Tehran was attacked and 52 Americans were held hostage. The film follows six embassy staff members in particular, and the CIA’s effort to get them out of the country discretely.

Among Iran’s complaints is that the movie is “too violent.”

Iran has previously by the American movies “300” and “The Wrestler”, although neither spurred lawsuits.