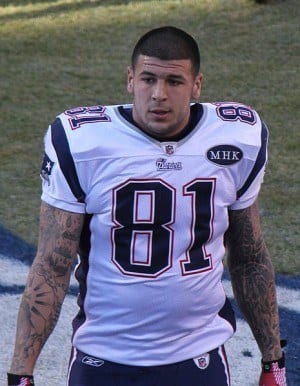 Fall River, Mass. – Prosecutors in the Aaron Hernandez case are expected to rest after spending more than two months presenting their case against him. The New England Patriots tight end has pleaded not guilty to murdering Odin Lloyd, on June 17, 2013. The final witness is expected, today, to be the medical examiner, who will testify as to the condition of Lloyd’s body after he was shot five times with a .45 caliber weapon.

Lloyd had been dating the sister of Hernandez’s fiancée when the murder occurred. Lloyd’s body was found less than a mile from Fernandez’s home, in an industrial park, officials say. At the time, Hernandez was under contract with the Patriots for $40 million dollars.

The prosecutors have had over 100 witnesses since the testimony began in late January. New England Patriots owner, Robert Kraft, told the courtroom that Hernandez had looked him in the eyes, shortly after the murder, and he’d told Kraft that he was innocent. Other evidence brought forth included home security videos, showing Hernandez, inside the home, with an object that appears to be a firearm, less than 10 minutes after the murder of Lloyd. Also presented was a marijuana cigarette that had been found near the body, which contained DNA matches for both of the men.

Another witness in the case, Kwami Nicholas, testified that Hernandez had stared angrily at Lloyd, a few nights prior to the killing, at a Boston nightclub. During his testimony, Nicholas stated, “He seemed like he was angry,” and added, “He looked like he was upset.” Prosecutors claim that Hernandez became angry at Lloyd after he was seen in the club associating with people that Hernandez did not like at the Rumor nightclub that night. The former Patriots tight end and two friends, Ernest Wallace and Carlos Ortiz, picked up Odin Lloyd at his home in the early morning hours of June 17, 2013, and drove to an industrial park less than a mile from Hernandez’s home in North Attleborough, Massachusetts. This was where Lloyd’s body was found later that day, prosecutors said.

Two of the most damning pieces of evidence presented in the courtroom were a .45 caliber shell casing, found in the rental car that Hernandez returned, that matched those found at the scene, and a shoe print that comes back belonging to a pair of hard to obtain shoes that Hernandez owns. The shoes in question, Nike Air Jordan XI Retro’s, are “very unique,” according to Herbert Hedges, a consultant for Nike Inc., said in his testimony.