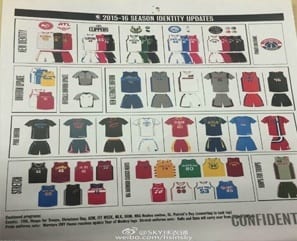 Looks like more NBA uniforms will be getting makeovers this upcoming season. The Internet’s favorite rumor pool, Reddit has been circulating a collection of the 2015/2016 Identity updates that seems to have everyone believing that they are pretty legit.

The identity updates also seem to include uniforms that have already seen updates during the year. The Charlotte Hornets, Indiana Pacers, Milwaukee Bucks and more have seen style updates.

This alleged style update sheet lets us get a peak of some anticipated uniform redesigns, including the Drake-designed Toronto Raptor’s uniform. I thought it would be covered in owls, but it still looks pretty good!

The new style sheet shows us some throwback uniforms that look really snazzy, channeling some 70’s and 80’s looks. Take a look at the style sheet and let us know which ones you would like to add to your jersey collection.