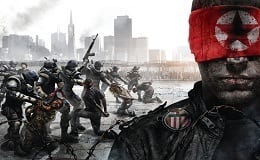 From the writer of Apocalypse Now comes a gritty, emotionally engaging shooter

There are things in “Homefront” which cannot be unseen. There are indelible images of civilians being executed on suburban street corners as their frantic children tug desperately on the pants of their Korean captor, screaming in anguish. There are jarring scenes involving mass graves and unspeakable torture. There are horrifying events which depict an American culture that has simply ceased to exist, swallowed and ravaged by a cruel and relentless Korean enemy. “Homefront” may be speculative fiction, but once you’re immersed in its emotional narrative it feels like a haunting reality.

The film industry’s burgeoning interest and involvement with video game developers nets a huge payoff here. John Milius, the screenwriter who penned “Red Dawn” and “Apocalypse Now” (and whose real-life persona was the basis for iconic “Big Lebowski” character Walter Sobchak), is behind the script of “Homefront,” which has a piercing emotional impact without relying on constant sensory assault or cheap gimmicks. It is also unapologetic in presenting a focused plot without pulling any punches or worrying about offending its audience.

The basic premise of “Homefront” involves the gradual and manipulative occupation of the United States by a United Korea. The chilling introductory cut scene reveals the plausible baby steps leading to America’s demise, beginning in 2011 and culminating in the events you help to orchestrate in the year 2027. In short, you’re a former marine pilot who rejoins a group of freedom fighters willing to risk their lives to reclaim even a slice of their once-great nation. We applaud developers Kaos and their publisher THQ for having the courage to present what many will consider a controversial and downright disturbing story, and for doing so with more class and respect than Infinity Ward’s infamous “No Russian” level from “Modern Warfare 2.” The caveat being that here the experience isn’t optional.

The single player campaign does succumb to the many tropes of First-Person Shooters, in stark contrast to its elevated storytelling. You know them as regenerating health, endless “Follow this guy” prompts and more F-bombs than a “Halo” match on Xbox Live. Someone needs to remind developers that occasionally colorful language has impact; endless cussing just comes off as juvenile. The story mode redeems itself by placing you – outnumbered and underpowered – in desperate situations that never wear out their welcome. From defeating the Koreans’ automated turrets that tower above the level to a brief but awesome helicopter sequence (you’re the pilot and shooter here), to a climactic finale on, underneath and above San Francisco’s Golden Gate Bridge, each of the seven missions are compact, poignant and memorable.

Visually, the Unreal Engine keeps allowing developers like Kaos to pump out magic, even if the palette is noticeably lacking any vibrant reds or greens. Then again, when much of America has been reduced to dirty, abandoned restaurants-turned-battlefields like White Castle and Hooters, the grays and browns seem appropriate. Overall, only the PC version will impress you graphically; with its console cousins feeling slightly washed out and dull in several spots, specifically building textures. That being said, it doesn’t detract from the experience. You simply won’t be bragging to your friends about the eye candy.

Interestingly, the entire single player experience feels trimmed by a professional film editor, which is understandable given the creator of the source material. Everything is concise and smartly paced; perhaps too concise for a video game. The story of “Homefront” is a vertical slice of the USA’s overarching plight against its Korean aggressor, and your team is likely one of the hundreds doing everything they can to take back America. The result is a five hour experience playable in one sitting (two if you are really obsessive) that leaves us satisfied but starving for a sequel.

If you’re searching for a solid solo FPS with a downright gritty and compelling story (yes, it’s the best we’ve seen from shooters in this generation) then “Homefront” is absolutely worth a rental, especially if you plan on skipping the outstanding multiplayer component. Of course, if you want your Battlefield itch scratched, The multiplayer of “Homefront” alone is worth the price of admission and will hold you spellbound for months to come.