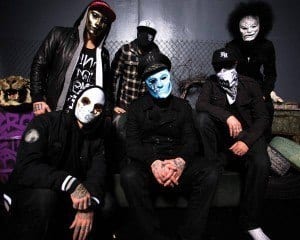 It would have been easy to just keep the masks on, to let the spectacle sell the music.  After the comical bravado of co-headliners Asking Alexandria and the bizarre DJ set from Borgore spinning records while two scantily clad women faux-stripped on stage next to him, Hollywood Undead could have easily closed out the World War III Chicago tour stop by simply going through the motions and they still would have wowed a by then under-whelmed audience ravenous for something, anything to cheer for.  Thankfully, however, the rap-rock group discarded the masks after one song and pummeled their way through the rest of a blistering set with all the force of a sledgehammer, letting the energy and urgency of their music provide all the spectacle the crowd would need.

While the Riviera had to make do as a last minute replacement for original venue the Aragon Ballroom, the sextet made themselves right at home, utilizing the smaller though still cavernous theater to put on a thunderous performance that still allowed for some intimacy.  Songs like “Undead” and “Been to Hell” pulsed and boomed, elating the fans whom arrived in makeshift Hollywood Undead masks.  As Charlie Scene, Johnny 3 Tears and company stalked the stage belting out lyrics that were alternately infected by righteous fury and tongue in cheek irreverence, the crowd ate it up, working themselves into a frenzy, screaming the band’s over the top lyrics in unison.

The setlist was made up of nearly wall to wall rockers, a showcase of buzzing rap-rock anthems bursting with angst and scattershot rage, but the group did allow for a lighter moment with “Bullet”, a tune so immediate and agreeably melodic it could easily be bulldozing through the Top 40 right now if it were not for its frank portrayal of suicide; even when Hollywood Undead goes soft, they keep a biting edge.

Still, Hollywood Undead are at their most effective when their songs roar with the din of a thunderclap, the band perched at the front of the stage basking in the crowd’s adoration while effusing an impenetrable and deserved arrogance.

Hollywood Undead operates within a musical paradigm that, frankly, I never really connected with as a teenager, never having the undirected rage begging for an outlet nor being drawn in by visual spectacles.  But when the band is functioning at their peak, they provide that outlet for the innumerable disenfranchised and disgruntled.  At their core, the band functions on some of the bedrock tenets of rock n’ roll: outsiders needing to express the angst and rage that inevitably comes from being dismissed by the support structure that is ostensibly intended to build them up.  Charlie Scene probably expressed this sentiment best when introducing, “Lights Out”:

“I’m going to dedicate this fucking song  to someone who told me I would never amount to shit.  Do you guys have someone like that in your fucking life?”

When that alienation and fury is firing, Hollywood Undead can inspire a legion of fans to brave a cold, rainy Chicago night, don their masks, and come together to take solace in the fact that perhaps no one else cares, but that doesn’t necessarily invalidate their anger.