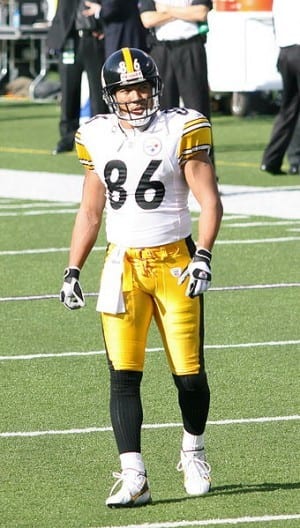 Hines Ward has chosen to retire from the NFL as a Steeler, choosing not to try and play for another team. “I can say I’m a Steeler for life and that’s the bottom line. That’s all I’ve really ever wanted,” a tearful Ward said.

Wide receiver Hines Ward had 1000 receptions and over 12,000 yard receiving, spanning a 14-year career with the Steelers. Ward was not only known for his play making ability; he was also known for his toughness and blocking to help his team win. A four-time pro bowler and MVP of Super Bowl XL, he is one of only eight players to have 1,000 or more catches over their career. He is ranked 18th all-time in receiving yards at 12,083 and is ranked 13th all-time in receiving touchdowns with 85 over his career.

According to the NFL Players Association, the average career of an NFL wide receiver is 2.81. Hines Ward’s career was five times the average, or 14 seasons. During those 14 seasons he missed a total of 7 regular-season games, or about 3%.

While Steeler’s fans will certainly miss Hines Ward, others will not. Chris Crocker, Bengals safety, spoke out about Ward and the way he played the game. He’s probably the first receiver to make blocking such a big part of his game. He was an all-around receiver. He was a dirty player, but he made a lot of plays. He tried to end people’s careers, and that’s not the way the game is supposed to be played.”

Despite his view on Hines Ward’s questionable tactics, Crocker admitted that the wide receiver is a likely candidate for the Hall of Fame.